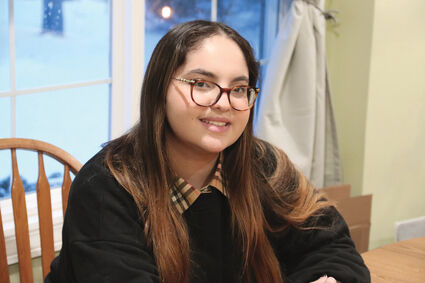 Doctors go to medical school, police officers attend the police academy and chefs go to culinary school. But for most people, being a citizen of their community requires no training at all. Hinsdale Central junior Suzan Nofal thinks that should change.

Nofal is one of more than 20 high school students from across the country chosen to help draw attention to the need for civics education through the inaugural Equity in Civics Youth Fellowship.

Throughout the yearlong program funded by the William and Flora Hewlett Foundation, fellows will participate in virtual workshops designed to prepare them to share their stories about equity in civics, drawing attention to the disparity and need for civics education in the classroom. By the close of the program, fellows will launch a national social media campaign, engage in group discussions on various topics, produce written pieces and media projects on equity in civics and collaborate on a virtual showcase on student voice.

"We want this to be a national campaign spreading the importance of civics education," Nofal said.

As a student at Hinsdale Central, Nofal is required to complete a civics class. It's there that her passion for the subject was born.

"I just fell in love with civics," said Nofal, who describes the subject as "basically learning to be a good citizen in your community." Civics education is about learning the importance of voting, knowing the roles of elected officials and of recognizing and respecting the rights of citizens.

As part of the fellowship, Nofal quickly learned that civics education isn't required or even offered at all schools. As a result, Nofal said she's come to appreciate the quality of the education she's receiving at Hinsdale Central and wants to do what she can to see that others have the same opportunities. That's something she hopes to work on, both as a member of the Fellowship and one day, as an elected official.

If not for COVID-19, Nofal would have traveled to Washington, D.C., as part of the Equity in Civics Youth Fellowship. But she's determined to get there one day, and not just as a visitor. She plans to run for local office and dreams of one day serving at the federal level.

For now, she's working on being a good citizen herself. To Nofal, that means volunteering. She gives her time to several local organizations, including The Community House, Hinsdale Junior Woman's Club, HCS Family Services and Community Memorial Foundation's Youth Community Changemakers.

She especially enjoys helping with the after-school program at Anne M. Jeans School in Burr Ridge - one of the many activities she hopes to resume when face-to-face schooling is once again the norm.

"I genuinely enjoy it," said Nofal, whose first step in promoting good citizenship is being a good citizen herself.