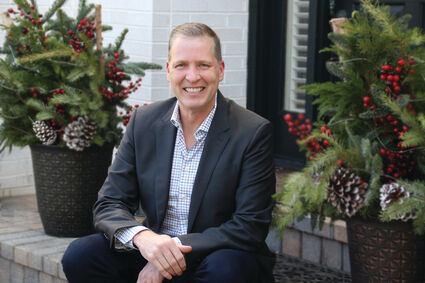 An unpleasant lending experience led Tracy Leddy to enter the mortgage business while living in California. Now a resident of Illinois, he has re-entered the industry with a renewed commitment to help homeowners and the community where he lives. (Jim Slonoff photo)

Why did you start your nonprofit?

Tracy Leddy's decision to re-enter the workforce in 2019 wasn't just about him and his family. He also wanted it to be a good decision for the entire community.

Married to a successful woman with an extremely demanding schedule, Leddy and his wife decided that he would be the one to stay home with the couple's four children. With the youngest now in fifth grade, Leddy said the time was right late last year to re-enter the world of mortgage lending. Having attended countless charity events with his wife, ABC7 anchor Judy Hsu, Leddy became acutely aware of the needs around him.

"I got a glimpse of how serious the need is for nonprofits in our community," Leddy said.

With the cooperation and support of his family and his employer, Guaranteed Rate Affinity, Mortgages4aCause was born.

For each mortgage closed, Leddy donates $500 to Mortgages4aCause, which since November 2019 has raised $9,000 for eight carefully selected organizations - four based in Hinsdale, three serving all of DuPage County and one serving the entire Chicago area. The American Heart Association of Chicago, the Hinsdale Humane Society, Bridge Communities, Loaves & Fishes, the Economic Awareness Council, The Community House (Willowbrook Corner initiative), Hinsdale Middle School PTO and the People's Resource Center of DuPage County have all benefited from the initiative.

"Each of these nonprofits share a special spot in my heart," Leddy said. "I developed a strong bond with their missions."

Little did Leddy know when he began his initiative just how much his help would be needed. As nonprofits have navigated their way through the pandemic, Leddy said he's pleased to have made the journey just a little easier.

And as the in-house lender at Coldwell Banker in Hinsdale, his goal is to make the home-buying journey a little easier, too.

Leddy said Guaranteed Rate Affinity is a perfect fit for him. Founded by a fellow Hinsdalean, the company is committed to helping communities and families grow.

"Homes are best in communities that care," serves as Leddy's mantra.

"I'm in a fortunate position to be able to make this give," said Leddy, who expects to donate at least $3,000 more in the coming weeks. He said he would be pleased to see others follow his lead. Perhaps more importantly, he hopes his effort shows his own four children the importance of giving back to their community.

With just a year behind him, Leddy said his business has plenty of room to expand.

"My goal is ultimately to do around 100 loans a year," he said. And with each of those loans, the impact of Mortgages4aCause on the community will grow.