Students enjoyed rehearsing, performing for filmed version of 'It's a Wonderful Life' 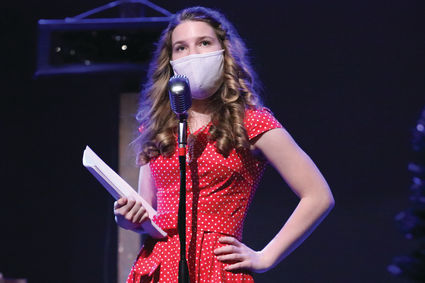 Hinsdale Central seniors Emma Linane (from left), Finnegan Van Horn and Quintin Craig performed their roles in "It's a Wonderful Life: A Radio Play" for a camera last month so the show could be streamed online Friday. The performance also will be broadcast over the radio Saturday, which is appropriate for the times, director Chris Kostro said. "I keep trying to think, 'What can I give the kids in this year that is weird, what could I do that is unique or new, that they haven't done yet?' " he said of the radio broadcast. (Jim Slonoff photos)

"It's a wonderful life" might not be the phrase most would use to describe conditions this December - or even for most of 2020.

Earlier this year, Hinsdale Central students were crushed when COVID-19 closed schools less than a month before they were to perform "Seussical."

"Obviously it was a blow for the kids," said Chris Kostro, a Central teacher and director. "We had been about three weeks away from performing."

Not knowing what the fall semester would bring, Kostro said he started thinking about shows that could be presented in a variety of formats.

Radio plays came to mind as a good option, but "War of the Worlds" didn't seem like a good choice during a pandemic. Then he looked at "It's a Wonderful Life," set in 1946 in a New York radio station.

"I read it and I love the movie," Kostro said. "It's perfect. We could do things in any format that we needed to do it.

"I love it," he added. "I probably wouldn't have chosen this show in non-COVID-19 times because I've never done a radio play before."

Tackling a new format did create a bit of anxiety for Kostro.

"Whenever you do something you've never done before, you're a little nervous about it, but I loved it," he said. "The cast was amazing. They did a great job."

Many of the performers had not seen the iconic film starring Jimmy Stewart and Donna Reed until Kostro scheduled a screening of the 1946 classic.

"That was hard for me, because up to that point, George had just been a character that I made in my head," said senior Quentin Craig, who plays George Bailey. "I saw Jimmy Stewart's iconic performance and that changed how I tried to perform."

One of the biggest challenges in playing George is conveying his good nature even as he is beset by difficult circumstances.

"He tried to leave at every chance he gets, but he never can, and playing that frustration building up over time and that conflict underlying with every scene, I think that also was a real challenge," said Craig, who lives in Clarendon Hills.

Senior Jessica Miller of Westmont plays George's guardian angel Clarence - renamed Clara for this performance. Striking the right balance between the angel's sense of humor and the seriousness of George's situation was demanding, she said. She also found performing without an audience strange.

"I think the biggest difference was not having that large audience," Miller said. "Usually it's the audience that pumps you up and gives you that energy for the show. We had some crew kids in the audience, but it wasn't filled like it usually is."

Senior Noela Musil of Hinsdale stretched her wings by serving as one of two foley artists, the individuals responsible for making live sounds effects for the show.

"It was honestly a lot of fun," she said. "Some of the sound effects were kind of weird."

When the audience needed to hear ice cracking, Musil crushed lasagna noodles. A briefcase opening and closing sounded like a car door doing the same. Stomping on corn flakes sounded very similar to stomping on snow.

Prior to the pandemic, Musil said she often would be at school from 7:30 a.m. to 7 p.m., heading to the auditorium immediately after her final class ended.

"Now I'm just kind of stuck at my house at my desk," she said. "It was very nice to be able to get up and go somewhere."

Senior Charlotte Froiland said she was fortunate to have the opportunity to perform with BAMTheatre this summer and thrilled to learn there would be a fall show at Central.

"Oh my gosh, it was unbelievable," the Hinsdale resident said. "I was just so extraordinarily happy. I remember being on the stage for the first time again for 'It's a Wonderful Life.' The Hinsdale Central stage has come to mean so much to every single Hinsdale Central person who was in the drama club."

Although Ben Sylvester just transferred to Central this fall, he understands what his classmates went through when "Seussical" was canceled. The Putnam County High School production of "The Addams Family" was canceled three days before opening night. After learning he had been cast as Peter Bailey (among other roles), Sylvester said he was incredibly grateful.

"I think once I saw my name on that cast list, I was kind of relieved," he said. "I felt like I was missing something after that show went almost all the way to production but we never got to give it to the people."

While it's interesting to be part of this piece of history, he said, he's ready for things to get back to normal. 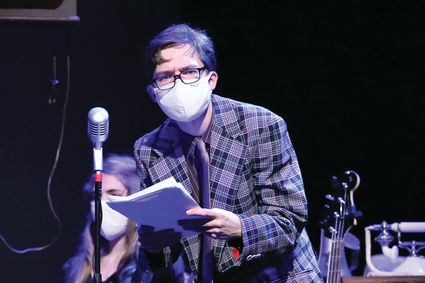 "I cannot wait for my first in-person performance again after this is all done," he said.