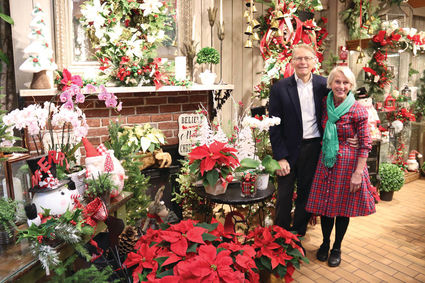 Jim and Gwen Phillip operate 50-year-old Phillip's Flowers & Gifts in downtown Hinsdale. Jim grew up in the family business, sweeping floors and doing other chores as a youth. The couple expressed gratitude for their patrons during a difficult 2020. "They genuinely are concerned about the well-being of shops that are here in the community," Gwen said. (Jim Slonoff photo)

The store has been decking its halls for a half-century of holiday seasons, much to the surprise of Jim Phillip, third-generation partner in the family business.

"We opened this shop in 1970, and I just realized that this is our 50th anniversary in Hinsdale," he said.

"This probably would have been too extreme a few years ago," he said. "Now, this is one of our best sellers."

One has to go back nearly 100 years to find the roots of the business, which was launched in 1923 by Jim's grandparents, James and Helen Phillip, with a small rented space in Cicero. Expansion over the ensuing decades saw Phillip's branch out into more suburbs, including Hinsdale. The store at 47 S. Washington St. was initially named Miss Lee Flowers after Jim's late aunt, Lee Phillip Bell, a well-known talk show host and co-creator of popular televised soap operas. It assumed the Phillip's Flowers branding a few years later.

Jim has brought his wife, Gwen, a fellow Hinsdale Central grad, into the floral fold. Gwen, who worked as store manager for many years and still maintains a regular presence there, remembered Bell's high-profile visits from her childhood.

"(Bell) was here on holidays. She'd be greeting people," she related.

A lot of greeting typically happens in December, the store's busiest month. Jim said despite a drop in in-store visits this year due to the pandemic, sales are blossoming.

"People are being more generous, so the average ticket is up," he said.

Of course, Valentine's Day and Mother's Day are also significant occasions in the industry. Restrictions last Mother's Day meant transactions were conducted over a table at the front entrance.

"It was the busiest day of the season and we were doing business it through a 30-inch opening," Jim quipped.

Many of Jim's relatives are involved in other parts of business, which operates five other stores, a design center for large events and a facility for managing office building floral displays.

"We're still probably considered one of the largest retail florists in the country," Jim said, noting the firm's early embrace of e-commerce.

The future seems to be in good hands: son James has ushered in the family's fourth generation, becoming the company's flower buyer domestically and internationally. Despite some thorny times over the years, the couple said the family tree has stayed strong.

"It's very unique to have a family business where everybody gets along so well," Gwen said.

"It's a great community to be in, especially during challenging times," he said

Gwen lamented not being able to offer her homemade cookies to visitors these days, but she can detect the smiles behind the masks.

"Just to see people's expression that it made them look good because of what we did," she said of the job's rewards. "It just gets in your blood, and you love making people happy." - by Ken Knutson