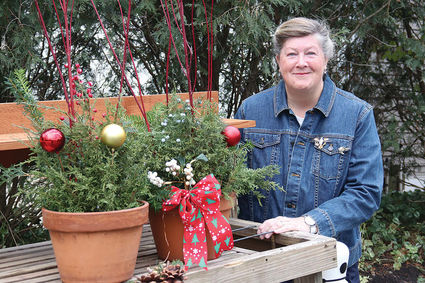 The season of the wreath has come around again, that symbol of continuous life with no beginning or end woven of enduring evergreen boughs.

Every year a sizable one adorns the Graue Mill and Museum building just north of Hinsdale in Oak Brook. The wreath, suspended high up and illuminated, is a holiday hallmark casting out Yuletide vibes for both visitors to the grounds and those motoring past on York Road. Hinsdale resident and Garden Study Club of Hinsdale member Pamela Coan has - for many seasons - helped construct it.

"It's one of the best types of collaborative activities that we do," Coan said, citing both the partnership with Graue Mill and all the contributors of the wreath-making material sourced from personal yards.

But with COVID-19, gathering a large group of club members to sort the flora and build the wreath was not an option.

"There are a fair amount of seasoned members that were not going to be able to participate," she said.

Instead, people were asked to create their own "bundles of greens" at home and drop them off at the Frederick Graue House.

"They would just leave their materials on the porch, and then there were eight of us who volunteered to come and sort and help attach them to the frame," she said.

The group convened during that beautiful stretch of weather in early November. Coan said the pandemic plan yielded a bounty of boughs.

"I think this year was by far the most variety that we had available," Coan said. "We have a lot of folks who are all gardeners in some capacity, so they go to their yards or work with their neighbors and trim off some six- to eight-inch pieces."

The bundled clippings were then sorted by the wreath-making team and attached by wire to a metal coil skeleton.

"People were very generous. I think it took us about an hour and half to make it. The final touch is a big red bow that one of our members makes," she related.

A Graue Mill crew then hoisted it to its elevated home, where it typically stays until about the end of January.

Coan she likes passing through the area to see its impact.

"It's amazing how may people visit those grounds. They do put a lot of light on it to accentuate it," she said.

Normally the club also would have made door swags for the mill's annual Christmas boutique. No boutique this year. But the wreath is there.

"What the wreath brought was a little bit of normalcy," she said. "We were so happy that we could carry on the tradition and bring a little bit of spirit to the community."