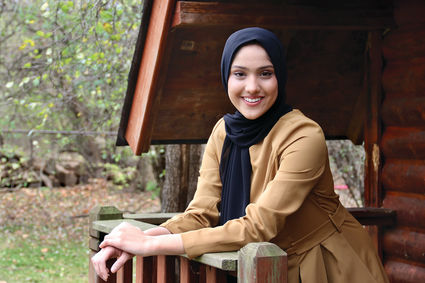 Aminah Ahmed, a junior at Hinsdale Central, is a youth activist against religious persecution in India. She hopes to inform more of her peers at home of the challenges minorities face in the South Asian nation. "There can't be advocacy without education," she said. (Jim Slonoff photo)

Youth is no obstacle to activism, as demonstrated by Aminah Ahmed.

The Hinsdale Central junior and first-generation Indian-American was inspired to advocate for justice by reports of women-led peaceful protests in India that began last December in response to the government's passage of the Citizenship Act. The act provided a pathway to citizenship for illegal migrants, but specifically excluded those of Muslim faith. The months of protests became known as the Shaheen Bagh movement for the neighborhood outside New Delhi that was the site of visible resistance.

"These women are fighting not only for their own rights and lives, but for the very nature of secularism, democracy and peace in India," Ahmed said

She joined the Indian American Muslim Council, the largest Indian diaspora nonprofit organization, to serve as its youth leader.

"Young people are the forefront of movement for freedom for equality, for justice. We just happen to be the ones of our generation to speak out."

In January, Ahmed traveled to Cincinnati for a IAMC event. There she met Sunita (who goes by a single name), co-founder of Hindus for Human Rights.

"We both had this shared sense of love and admiration for the women of Shaheen Bagh," Ahmed said.

The troubled history between Hindus and Muslims in India did not factor in.

"She saw that their rights were being trampled upon," Ahmed said.

Together they launched the "Art as Resistance: In Honor of Shaheen Bagh" campaign, bringing together art and artists from all over the world in honor of the women's resilience.

"We wanted to show the world what Shaheen Bagh was and that we stand with them," Ahmed said. " 'Shaheen Bagh' is a way of thinking and I really think that these women are revolutionary."

Loved ones have felt the pain of persecution, she revealed, including the threat of death at the hands of anti-Muslim gangs.

"There's a price that is paid for being a Muslim in India," she said.

Ahmed contrasts that with the relative comfort members of diaspora experience in the U.S.

"What I'm doing isn't something out of the ordinary," she said. "(The women in India) are doing far more work than many of us could imagine."

Ahmed seizes opportunities to speak on issues of mistreatment of marginalized communities. During the pandemic, she's helped coordinate webinars and hosts the web-based talk show NextGen to amplify the voices of young people. At Central she shared her story at town halls sponsored by the Culture and Equity Leadership Team.

"I spoke about my Indian identity and seeing what's happening in India, how it's really shaken me and how I choose to speak out about it," she said, noting parallels with America's racial justice movement.

"The point is that you're putting in the work to see justice for all people," she said. "Issues of injustice, they're all interconnected in some way. As long as we have people at the front who are opposing those trying to persecute them, I think we will one day see justice."