Boys come in fifth, girls are eighth at sectionals with two runners placing in top 10 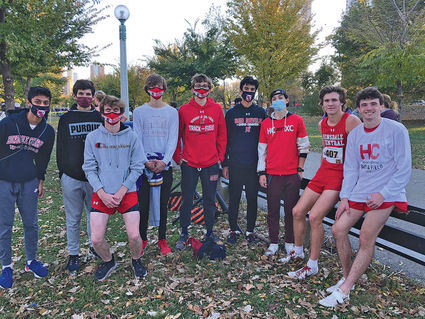 Hinsdale Central's boys and girls cross country teams competed in their final meets of the season Saturday at the IHSA Sectional at Whitney Young High School in Chicago. (photos courtesy of Molly Watcke and Mark McCabe)

The Hinsdale Central boys cross country team met its goal at the sectional meet Saturday, placing in the top five.

"If everyone would have had a good day, we would have finished in the top three, I believe, but not everyone had a great day, so it didn't happen," coach Jim Westphal said.

One runner who had an excellent day was sophomore Daniel Watcke, who placed second with a time of 14:54.16.

"He's just been racing so well that he's certainly put himself among the elite distance runners in the state," his coach said. "He had a great race."

Before the race, Watcke said his coaches gave him the goal of placing third.

"I was like, 'OK, that would be a solid finish for me as a sophomore.' I was just aiming for top three," he said.

He credits a positive mindset and desire to win for his success.

"I always think I have a great attitude going into races and I'm always ready to compete. I like to win," he said. "I'm a competitive guy. I carry that everywhere."

Piyush Mekla and Henning Ley, the only two seniors in the race, placed 26th and 30th, respectively (see sidebar for times).

"It was bittersweet because it was technically their last cross country meet of their career in high school. I know they were hoping to run a little better, but they ran solid races." Westphal said. "The race didn't start out as planned. They struggled, but they fought the whole way through. They certainly should be proud of how they battled."

Watcke said one of his goals was to make sure his older teammates had as many chances to compete as possible.

"I honestly felt for my senior friends, Piyush Mekla and Henning Ley," Watcke said. "We knew the season could get shut down at any second. We were doing all the right things for them because it was their senior season."

Westphal said the restrictions related to COVID-19 didn't have a significant impact on Central's team.

"Other programs had to quarantine. We were extremely fortunate that our kids remained healthy and hopefully continue to remain in good health. To be able to get through the season without that in this day and age is rather fortunate," he said.

He does wonder if the team would have performed better at sectionals if runners had not been divided into flights.

"I think had we not had to be in that position, I think our kids probably would have run better, because I think they feed off each other," he said.

He knows team members made the most of the opportunity to have a season and said coaches did, too.

"Even for us, it was like, 'Oh my gosh, I get to actually be outside and yelling at kids again to run faster!' "

Like their male counterparts, girls on the Hinsdale Central cross country team finished their season about where they expected to.

"It was a solid way to end the season," coach Mark McCabe said of the eighth-place finish. "We've got some really strong front runners and then we've got a very young group, only one senior in our varsity group, so we're excited for the future."

With no state meet to cap off the season, the team focused on personal improvement.

"We're looking at personal improvement more than ever, not only to be the best we can be this year but to hope for next year as we return to normalcy," McCabe said.

For sophomore Catie McCabe, that focus led her to run her two best races in the post-season. She placed seventh at sectionals with a time of 17:51.14 and second at regionals with 17:43.95. She said she's been working to avoid her tendency to see a "pecking order" in her races.

"I've known that I'm confident in my training and in myself for running, but comparing myself against others, I get a little discouraged," she said. "I think focusing on that and being confident in my physical ability will just lead me to put better times on the table."

Her coach - and dad - said her training has been going well, and she peaked at the right time.

"She raced well all season, but it was really these last two weeks where she showed in a meet what she has been ready to do all season," he said. "It's great for her to come together and finish the season on a high note."

He also praised sophomore Sarah Fischer, who ran the "best race of her life" at regionals.

"She's been an incredibly consistent No. 2 runner for us all year long," McCabe said.

Freshman Cate McDonnell was a great addition to the team, he added.

"I'm just really proud of the girls this year. I commend them for not missing a beat. I think it's really a testament to their dedication and the high level of motivation they have to really be the best they can be.

"We've just really focused on being grateful for the opportunity," he added. "Being involved in their sport is one of the best things they have going on in their life right now."