Turnout high nationwide, in DuPage; citizens still wait for next president to be declared 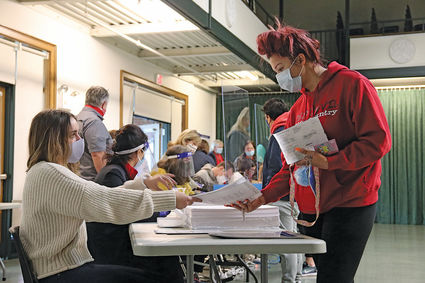 Gisel Santiago checks in with election judges Tuesday morning at The Community House. The 18-year-old was voting for the first time in this historic election.

First-time voter Gisel Santiago said her mom woke her up early Tuesday morning so she could head to her polling place at The Community House.

"She wanted me to go yesterday, but I had school and work," said Santiago, an 18-year-old graduate of Hinsdale Central High School and freshman at the College of DuPage.

"Bravo!" one election judge said after hearing this was Santiago's first election. "I love to see that. It's so exciting."

Santiago said she was equally excited to cast her ballot - especially for Joe Biden for president.

"I was kind of excited to vote for the candidate. My family is real big on that."

Fellow Hinsdalean Winston Wheeler was also eager to support his choice for president.

"This is the first time I voted in eight years," he said. "I feel like our country is in dire need of a great leader."

Wheeler, who served active duty in the U.S. Army from 2009-12, said he thinks President Donald Trump has been an amazing leader and will continue to do a great job.

Mary Evans, a 36-year-resident, also made the decision to vote in person Tuesday at The Community House.

"I think because I always do," she responded when asked why she waited until Election Day to cast her ballot. "Since so many people had voted previously, I figured there weren't going to be too many crowds here."

Maintaining their Election Day routine was also important to Matt and Jackie Ruza, who arrived with their youngest daughter, 16-month-old Amelia, in her stroller.

"There have been so many things that have changed, it's been nice to stick to some normalcy," Jackie said.

The two also wanted their oldest daughters, ages 9 and 11 (who were home in their pj's), to know they were fulfilling their civic duty.

"They both asked us who we are voting for, so they are aware of it," Matt said.

Like other voters, the two were not confident the country would know the results of the presidential election before the day was over.

"We're hopeful we'll know, but I don't think we will," Matt said.

Of course, presidential votes were still being counted at press time Wednesday afternoon. Neither candidate had received the required 270 electoral votes to win. Biden had a substantial lead, with 248 compared to Trump's 214. But many swing states were still too close to call.

"Tonight, the voters of the 6th District sent a resounding message," he said in a press release issued very early Wednesday morning. "They voted for science and facts. They voted for decency, acceptance and love and rejected bigotry and racism. They said that they believe we should all have high-quality, affordable health care. They acknowledged the climate crisis and decided we must do something about it. 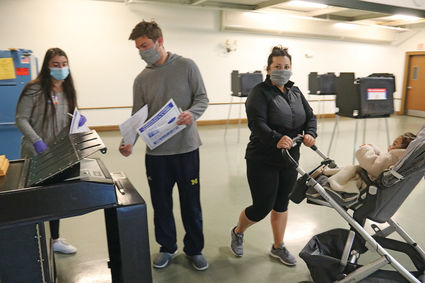 Matt and Jackie Ruza had 16-month-old daughter Amelia in tow when they went to cast their ballots Tuesday morning at The Community House. (Jim Slonoff photos)

"To the voters - you have given me a tremendous amount of responsibility, and I can only hope to live up to your expectations," he continued. "Over the next two years, you can expect more town halls and accessibility from my office. In Congress, I will continue to advocate for our district on COVID relief, health care, combating climate change and job creation."

Republican Deanne Mazzochi will continue to represent Hinsdale and the 47th District in the Illinois House of Representatives after defeating Democratic challenger Jennifer Zordani.