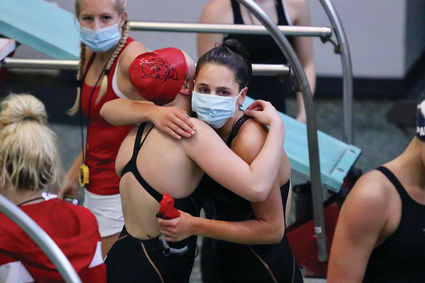 Even without a state final, the Hinsdale Central girls swim team made sure it left its high water mark on the 2020 season, posting a slew of new school records en route to a commanding sectional championship.

The host Red Devils treated the IHSA sectional Oct. 24 as if it were the state meet, said head coach Bob Barber. The result was a winning 246-point tally, 66 points clear of runner-up Downers Grove North.

"We had quite a showing at conference (on Oct. 17) and tried to match that and knock off a few pool records at Central," Barber said. "Our team showed dominance."

Leading the record-shattering charge was Kendall Pickering, whose winning times in the 200-yard individual medley and the 100-yard backstroke rewrote the school's sophomore, varsity and pool record books, while her 1:03.44 in the 100-yard breaststroke set a new pool standard.

"I'm really excited about it. I was keeping my eye on those records all season - I especially had my eye on the 200 IM," Pickering said, "It was really cool and I was excited to get it."

On Monday night, the team held its own private relay meet for national time trials for the three relays - the 200-yard medley, the 200-yard freestyle and 400-yard freestyle - which were not raced during the season due to COVID-19 restrictions. The foursome of Pickering, senior Lanie Quinones, junior Haley Dynis and sophomore Kit Schneider set new pool records in all of them.

Quinones, who won the 50-yard and 100-yard freestyle events in the sectional and set the school's varsity 50-yard freestyle record of 23.01 earlier this season, said she was gratified by the pool relay records, knowing that future teams likely will be swimming in Central's new pool now under construction.

"I was really excited that we got those relay records as a senior," she said. "No one's going to get a chance to beat those records because they'll be swimming in a new pool next year."

Schneider, who set a new school sophomore mark in the 100-yard freestyle with a time of 51.28 earlier this year, said being part of all three record-setting relays was special.

"I think it's really cool and I love that we all got to be up there as a team and not as individuals," she related.

"I think I'm going to remember most how we came together as a team during this tough time and built each other up," she said. "Without that, I don't think we would have done

Barber said the fact that having a season at all was in doubt over the summer deepened appreciation for the chance to compete.

"Everything considered, it was a really great year," he remarked, noting that 90 percent of team members achieved the best times of their career between the conference and sectional meets. "That's quite a bounty of lifetime bests to hang their hats on."

And it means there will be a lot of freshly painted names and times hung on the record board, with nearly half of them bearing the name of Pickering. Of the 33 varsity, sophomore and pool records, Pickering now owns or has a share of 16 of them.

"I did not expect to have 16 records now, which is pretty exciting," she said, before quickly adding that "a lot of them are in relays that I did with my teammates."

Her bounty includes all three categories for the 100 breaststroke, 100 backstroke and 200 IM. In the last, Pickering's blistering time of 1:01.63 in the conference meet earned her a spot at the Toyota US Open next month in Indianapolis.

Senior diver Roslyn Tischke was the sectional champ with 474.9 points and earlier this year set the 11 dives pool record of 440.75. Freshman Burley Bokos won the 500-yard freestyle event with a time of 5:04.66.

Bokos admitted to being surprised at the result, knowing her freshman counterpart at Downers North was a tough rival.

"I had no idea I was going to win it. I've always competed against her and we've always been so close together," she said. The time also realized her season goal of going under 5:05.

Barber praised Bokos' maturity for "kind of showing the state what she's capable of."

Because of the safety restrictions, swimmers waited in the gymnasium until their event but were able to watch their teammates on spotty livestream.

"I just wish that we could be on deck cheering for our teammates," Bokos said. "We usually couldn't tell how anyone was doing until they came back."

Sophomore Carrie Kramer actually set varsity and sophomore records in the 100 breastroke in her heat at the conference meet, marks that were subsequently broken by Pickering. Kramer, who placed second in the 100 breastroke and 200 IM on Saturday, said not having cheering teammates on deck and fans in the stands was "weird."

"You had to get yourself excited because usually you can rely on your friends (to give you a boost) and now it's different," she observed.

Schneider said that feeling of isolation brought the team closer together.

"We had to be our own fans to cheer us on even more to get us going. It definitely changed our perspective on being a team and being a teammate," she remarked.

Quinones said time spent with her teammates amidst social distancing will stick with her.

"It was just nice to get to be with everyone. I don't usually like early morning practice, but it was always the highlight of my day, what I looked forward to in my day," she said. 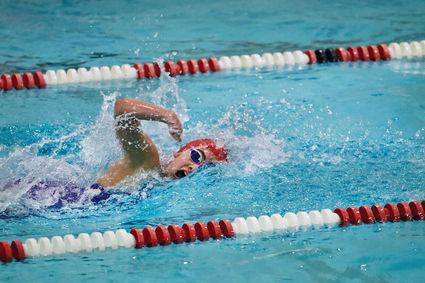 Barber said his heart breaks for his seniors like Quinones and Tischke, who do not get to experience a final state meet, but he's happy they both made the record board.

"We would definitely have represented Hinsdale Central very well (at state)," he said, citing the team's remarkable depth.

He praised the team's unyielding desire to compete while complying faithfully with COVID-19 protocols. With so many coming back next year, the question is how many more records can they shatter?

"Many of the girls are underclassmen, so they may get another chance," Barber said. "They're not content unless they're improving. They clearly showed that they can overcome some pretty steep obstacles and still improve."