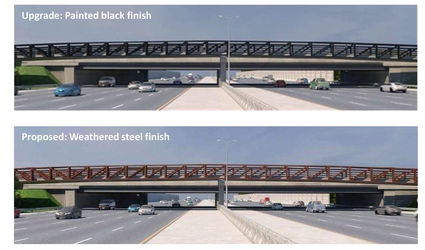 The two color options for the new walkway along 47th Street are black (top) and unpainted weathered steel.

A new pedestrian bridge will eventually span the Tri-State Tollway connecting Veeck Park in Hinsdale with Spring Rock Park in Western Springs. But it might not be the one Hinsdale officials wanted.

The walkway linking the towns will be built by the Illinois Tollway as part of the Central Tri-State Tollway expansion project, replacing one that has long existed further to the north. This summer, the Tollway provided the villages with a few design options and asked them to agree on one.

Hinsdale trustees expressed a desire for the painted bridge constructed with safety rails and vertical pickets. But last month, Western Springs trustees voiced a preference for the unpainted look with a galvanized chain-link fence, citing the cost savings associated with that design, according to the Heather Bereckis, superintendent of parks and recreation,

"They don't want the bridge to be painted black, they want it to be the weathered steel color just because they don't want to have to deal with ongoing maintenance," Bereckis told parks and recreation commissioners at their Oct. 13 meeting. She added that the trustees preferred the chain-link fence "because there was more maintenance related to (the rails and pickets)."

If Hinsdale insisted on its choice, Bereckis said, the village would bear the full brunt of any additional costs going forward. In the absence of an agreement, the default selection is the unpainted, chain-link fence option.

Tollway spokesperson Joelle McGinnis said via email Wednesday that the villages had agreed on the style and color of the bridge as well as the style of fencing. The only remaining issue was fencing finish. The villages plan to provide final direction in November, "so the Tollway can wrap up plans by the end of the year," she said.

The $4 billion Central Tri-State Tollway project involves reconstructing and widening 22 miles of I-294 from Balmoral Avenue in the north to 95th Street in the south. A temporary "shoo-fly" BNSF bridge is now operational, according to Tollway spokesperson Joelle McGinnis, while crews begin demolishing the old railroad bridge to accommodate the four lanes being added to the tollway.

"The temporary bridge at the BNSF bridge was completed this summer, trains now are shifted onto it and demo is scheduled to begin shortly," McGinnis reported.

The project is on schedule for 2026 completion. A project overview and updates are available at https://www.illinoistollway.com/projects/tri-state/central-tri-state-reconstruction.