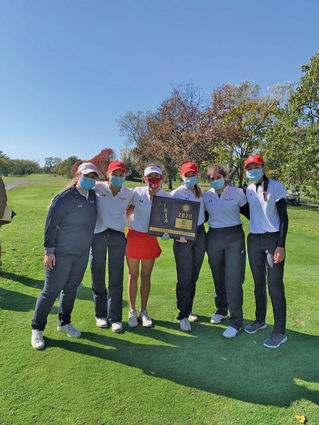 The Red Devils kept their composure to win their 2A IHSA sectional championship with 312 strokes, three strokes better than runner-up Sandburg.

"It was really close," head coach Nick Latorre said of the suspense as both teams battled to the end for the victory. "They have great attitudes and competed and did a great job all year."

The tournament marked the end of the 2020 season as safety concerns about COVID-19 forced the cancellation of state meets for fall sports.

Junior Libby Larson led the team ­ - and all competitors – with an impressive 74 in tough conditions. She said she did her best to account for the wind on each hole,

"Just clubbing up on a lot of (holes), unless the wind was in my favor," Larson said of her approach. "That's definitely an extra challenge."

Happy with her ball-striking, though not as pleased with her putting, she said her ability to hit most greens in regulation on such a difficult day was key.

"When you hit your irons well, it definitely feels like it's going to be a good day," Larson said.

"It made me think through my shots a little bit more on the green and all my other shots, too," Ascher said.

Owens said she felt some pressure competing in her first high school sectional.

"I think overall I played really well. I think I got a little bit nervous at the end," she remarked. "I think I persevered through a lot stuff."

One of the biggest tests, Owens related, was not being bothered by leaves blowing across the course, particularly right before a crucial putt. Latorre said the girls concentrate during the season on mental toughness.

"It got tougher as the day went on, as the wind kicked up," he said. "We've got girls that really put a lot of emphasis on preparation. They practice real hard, and this year it was the same as always."

Playing in the final grouping of the day, sophomore Sarah Thornton nailed down the victory with solid play down the stretch to post an 80 as her teammates cheered from just off the 18th green.

"I definitely didn't do as good as I should have, but I'm just glad I finished out good," Thornton said.

Senior Rei Hemmer said the fellowship of the team while school classes remained remote was central to the squad's success.

"We went into the tournament with a sense of team camaraderie, knowing that you can trust your teammates," she said.

Ascher lamented not being able to gather for their customary weekly team pasta parties this year but was thankful for opportunity to play.

"It was a weird way to finish, but I'm just happy we had such a good team," she said.

The Hinsdale Central boys golf team earned a runner-up finish in its 3A IHSA sectional at Blackberry Oaks Golf Course in Oswego Tuesday.

The squad's score of 309 was second best to the 300 shot by champion Glenbard West.

McMillin, who posted the team's third best score with a 78, said he had ups and downs during his round while battling tough conditions.

"I think that I struck the ball pretty well today, but struggled a little bit with my putting. I felt like I made a lot of little mistakes today which led to some bogies, and I only had one birdie on the card today," he said.

Cornell said the wind raised the difficulty level of the course, which features narrow tree-lined fairways and a lot of water. 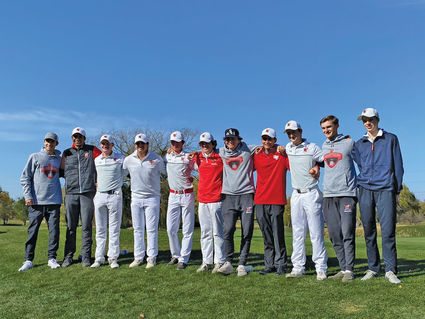 The Hinsdale Central boys golf team finished its 2020 season by capturing runner-up honors at its 3A IHSA sectional Tuesday. In addition to the 2020 tournament roster, many of the varsity squad members made the trip to Blackberry Oaks Golf Course in Oswego to cheer on their teammates, all of whom posed for this post-meet photo: Vasya Antipov (from left), Shubham Nain, Jack Inabnit, Michael Spitzer, Drew McMillin, Peter Sakkos, Jackson Steigbigel, Vincent Naccarato, John Cornell, Ben Rasmussen and Emil Riegger. (photo courtesy of Shelly McMillin)

"It was definitely pretty breezy, especially when it would gust up 25 or 30 miles per hour. You had to adjust to it with your club selection," he said.

But he was glad to be able to contribute to the team's performance.

"I finished strong to give my team a fourth score," Cornell remarked.

McMillin reflected on his final season as a Red Devil, citing the win over rival LT as a highlight.

"There were lots of fun times with the team at practice this year," he said. "Winning conference this year was also really special since we shot 292 as a team, which was a really good score for us. Overall it was a really fun senior year with lots of great memories."

Cornell agreed, noting the team didn't even learn that a sectional would be held until a couple of weeks ago.

"I was nervous about how far we would get into the season, and if we would be able to finish it," he said.

Along with the sectional performance, winning the conference and regional titles were a nice way to close out his Central career, Cornell said, and he believes the experience made him a better player.

"We were a close team. We have so much depth and a lot of talent. Practices were really tough because you have guys who are constantly pushing each other to make the top-6," he said. "It made for a tight-knit group of guys."