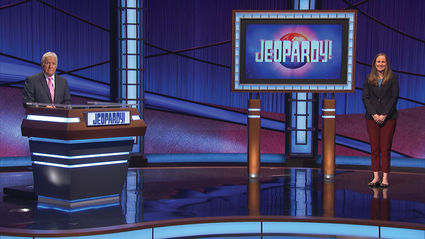 Kristin Hucek poses on stage with "Jeopardy!" host Alex Trbek. She said he tapes five show a day, including the one Hucek taped as a contestant Aug. 17. "He fully changes his suit - the whole outfit - for each different show," she said. "He looked very put together." (photo courtesy of Kristin Hucek)

Kristin Hucek was a week away from her wedding day on Aug. 1 when her phone rang. It was the casting office for "Jeopardy!" telling the bride-to-be she was now a contestant-to-be.

"I just got a call out of the blue asking me if I could show up to tape the show," said the Hinsdale native.

Hucek, now an attorney in San Francisco, had been waiting since last year for the call. An online application and a studio screen test in Los Angeles was followed by months of silence.

"This was my second time trying out for the show. You're told, 'Maybe they'll call you, maybe they won't" she related. "I had put it in the 'Never going to hear from them' category."

The 2004 Hinsdale Central grad has imagined being on the quiz show since her youth, when she would hustle home from The Lane School and Hinsdale Middle School to catch each episode. From Central, Hucek went on to earn her bachelor's degree in economics and French at the University of Virginia and her juris doctor from Harvard Law School. Her August wedding had been scheduled for May 2 until COVID-19 forced it to be delayed and significantly downsized.

Deep in matrimonial preparation, the call came as a shock.

"I had totally put ("Jeopardy!") out of my mind. I was very surprised when I saw who was calling," Hucek said. "I assumed during the pandemic that they weren't even filming anymore."

Knowing it likely was a once-in-lifetime chance, Hucek and her now-husband, Arthur Plews, held their 16-person nuptials in Oak Brook - with her younger sister Grace officiating - and flew to Portland, Ore., for a weeklong honeymoon road trip down the California coast, arriving in L.A. Aug. 17 to tape the show.

"My husband knew that I had auditioned and he is a fan of the show, too. It wasn't a question of whether or not we could change things up and kind of adapt to the circumstances," she said.

During the drive the newlyweds covered trivia on U.S. Presidents, Shakespearean plays and other topics they thought might come up. They took their required COVID-19 tests outside of Oregon's Crater Lake National Park.

Once at the Culver City set, she and other contestants cooled their heels in a recognizable waiting room.

"We were hanging out all day in the 'Wheel of Fortune' studio," Hucek remarked. "It was very surreal experience."

The "Jeopardy!" set was smaller than expected, she said. Then Alex Trebek stepped out.

"The first time you see Alex Trebek is that moment, and your reaction is captured on camera," she said. "You see him and all of sudden you have to start playing the game. Of course, he looks like just he does on TV."

No one could come within 10 feet of him, she noted, and masks had to be worn at all times except during play. Hucek credited her training as a litigator with helping her think quickly on her feet. The biggest hurdle? Timing the buzzer push.

"I didn't appreciate how important that buzzer timing is. Especially getting it just right, because they penalize you if you buzz in too early," Hucek explained.

Hindsight is, of course, always clearer.

"I've kind of been replaying the game in my mind. The stress of being on camera is real, and I have more sympathy now for those that don't score very well," she said.

Her anxiety is now directed at having to watch herself on screen.

"I don't enjoy watching myself or listening to myself on video, so that's going to be nerve-wracking,"

Hucek knows high school friends will be watching, some of whom she's known since they were preschoolers together at Union Church. Another viewer will be Hinsdale Central French teacher Terry Meyers, whom Hucek said helped lead her to pursue the language in college.

"She was one of those unforgettable students," Meyers said of Hucek. "She had a great spirit and good heart and a huge intellect."

Meyers, who retired from Central in 2010 after 31 yeas and now is a substitute in the Chicago Public School system, said watching the paths her former pupils take is a perq of the job.

"It's always fun to see what they go on and do, and to be remembered is a huge complement," she said.

Hucek wouldn't divulge any detail of her performance but suggested she's still pinching herself over the experience.

"You kind of always fantasize about it, but you never really think that it will become a reality."