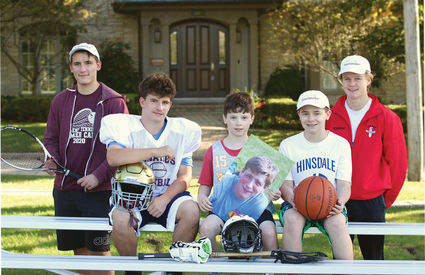 Luke Marcic (from left) with Jackson, Spencer and Connor Mangone and Connor Schwarz are trying to spread the word about the just1mike foundation's Facebook fundraiser this month. As athletes from Benet, St. Ignatius, Madison, Hinsdale Middle School and Hinsdale Central, they hope to spread the word about sudden cardiac arrest among their teammates and classmates. (Jim Slonoff photo)

Kristy Brindley's heart goes out to parents who get a call that their high school son or daughter had an abnormal EKG at a Young Hearts for Life screening.

"I know that's going to be a very hard call to receive and a very shocking call," Brindley said. "In reality, I know they just received a blessing. They got a call much different than our family."

The call Brindley received in the summer of 2016 was that her son, Michael, had died of sudden cardiac arrest while attending summer camp at Culver Military Academy. He was 16.

Michael would have turned 21 yesterday, and his October birthday is particularly poignant because it is Sudden Cardiac Arrest Awareness Month. In recognition of both events this month, the just1mike foundation is holding a Facebook fundraiser, asking for donations of $21 to help fund heart screenings for high school students. The foundation, founded in 2017, works with Young Hearts for Life to sponsor free EKG screenings at Hinsdale Central, where Michael was a rising junior, and several other area high schools.

Members of the foundation's junior board - including brothers Jackson and Connor Mangone of Hinsdale - are working to promote this month's fundraiser.

"We're both athletes," said Jackson, a freshman at St. Ignatius who plays football and baseball. "We know right around our age is when this happened to Michael."

Connor, an eighth-grader at Hinsdale Middle School who runs cross country and plays basketball, said he suspected he had heart problems when he was younger and underwent multiple EKGs. He turned out to be fine but hasn't forgotten the experience.

"It was worrying knowing other kids might have issues with their heart and they wouldn't know about it," Connor said. "I just want other kids to be safe and I want them to be aware."

The brothers said while the suggested donation amount is relatively small, it can add up.

"We have $2,000 currently and it's only been a couple of days," Jackson said last week. (The total had climbed to more than $2,700 by Wednesday morning.) "We also noted that if you don't feel comfortable or you can't afford to give 21, anything will be appreciated."

"Of course they can donate more if they do want to," Connor chimed in.

Luke Marcic of Hinsdale, a junior tennis player at Benet Academy, arranged for the foundation to make a presentation via Zoom to the Oak Lawn Healthcare Rotary, which in turn made a generous donation.

He believes more people are learning about sudden cardiac death through the foundation's efforts.

"I certainly feel like through our work and spreading the news, that some (lost) lives have been prevented," he said.

Brindley is grateful for the junior board's support.

"They are able to really help us get the word out, especially through social media. They are wonderful feet on the ground," she said. "It touches my heart deeply to see this younger group want to really share Michael's legacy and share this very important lifesaving work. We're working very hard to support our mission, but their involvement is truly special."

Early this year, junior board members had been busy planning a June golf outing, which was canceled due to the pandemic. Screenings have been put on hold as well due to COVID-19, which can cause heart damage.

"It seems more important than ever to make sure these kids are screened," Brindley said.

She noted that student athletes aren't the only young people who are susceptible to sudden cardiac arrest. It is the No. 2 cause of death for people younger than 25 and the leading cause of death on school campuses.

"There are many kids that have a hidden heart condition that is associated with sudden cardiac death that will fall asleep and they might not wake up or they will be sitting at their desks (when it happens)," she said.

Attending screenings is an emotional experience for her.

"Usually by mid-morning, I'm checking with Young Hearts for Life and by 10, 10:30, 11, I know they have already identified a student or students who have come back with an abnormal test and will be recommended for further evaluation."

That number grows as the day progresses, she said.

"It brings me to tears. I think about my son, how his life is working so hard to save the lives of others."

Brindley said Michael was a warm, outgoing young man who had a great sense of humor and a smile that lit up the room.

"He was a very affectionate young man," she said. "He let people know what they meant to him. There was no question you were loved and cherished if you were part of Michael's family or friend group."

Michael loved sports and was a fan of numerous teams, including the Oregon Ducks, Michigan Wolverines, Buffalo Bills, Oklahoma City Thunder and the Chicago Cubs.

"All who knew him knew his passion for sports and his dream of becoming a sports broadcaster some day," his mom said.

The foundation is named after his sports blog, just1mike.com, which he started when he was only 13.

The Brindleys, who have moved from Clarendon Hills to California due to husband Bob's job transfer, continue to focus the foundation's efforts in this area.

"We received amazing support in many ways from the community," Brindley said. "We lived there a very long time and raised our family there." 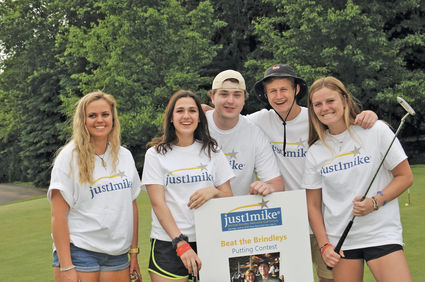 Foundation junior board members helped plan the 2019 golf outing to raise money for EKG screenings and were hoping to hold another event in June before the pandemic hit. (photos courtesy of Kristy Brindley)

She said the foundation is beginning to expand its effort to include donations of AED machines and training on how to use them.

"I hope to see that be a much bigger step in what we do, so we all can be prepared in a cardiac emergency, wherever we are - to know we can save a life and won't hesitate in doing that," she said.

For now, despite the pain of her loss, she is focusing on what would have been a very special birthday for Michael. She posted a slideshow and message to her youngest son on Facebook yesterday in honor of the occasion.

"Your zest for life, loving ways, passion, courage and gorgeous smile are written all over our hearts and your beautiful light continues to shine so brightly through the life-saving work of just1mike," she wrote.

To donate, visit https://www.facebook.com/just1mikeb, mail a check to just1mike at PO Box 276, Clarendon Hills, IL 60514 or use Venmo: @Kristy-Brindley.