Nazareth takes a stroll back in time 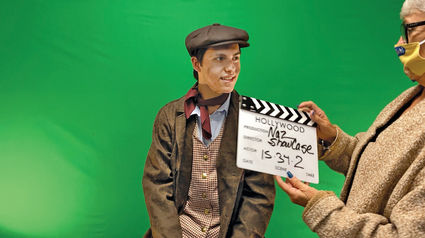 Harrison Gianares plays Bert from "Mary Poppins" and Lorraine Healy is Lucy from "You're a Good Man, Charlie Brown" in the Nazareth Academy Fall Showcase. All the actors were taped in front of a green screen for the virtual performance, which launches Saturday. (photos provided)

A power button will replace the stage curtain and the rewind button will take the place of a curtain call in this year's fall theater production at Nazareth Academy.

Like so many events this year, the fall play at the LaGrange Park private high school will be presented entirely on video this year.

After 40 years of teaching and directing, theater director Kim White said she thought she had done it all. But this year has proven to her that even with decades of experience and dozens of shows under her belt, there's still more to learn.

"Everything was new once," White said.

And although she had never created a virtual theater production before, White said she was determined to offer an experience for her students this year.

With the help of staff, students and alumni, White and the Nazareth Academy Drama Program will present "Fall Showcase: Scenes from the Naz Drama Legacy." Set to launch at https://www.nazarethacademy.com on Saturday, Oct. 10, the production features scenes and monologues from plays and musicals presented throughout the school's history. Portions of 16 shows - from "Our Town" to "Seussical" - will be performed by current students of Nazareth Academy.

"I just started picking some of my favorite monologues from the many plays I have done," White said.

Rehearsals for the Fall Showcase were done entirely via Zoom - something that sophomore Harrison Gianares said he unexpectedly learned to enjoy.

"It was nice to just be at home," he said, and to participate in a performance without the long hours of rehearsal that a play typically requires.

To prepare for his portrayal of Bert from "Mary Poppins," Gianares said he watched the original movie and studied the work of Dick Van Dyke. Like the rest of the cast, Gianares was responsible not just for learning and perfecting his part, but also for preparing his own costume, mostly from items from his own wardrobe.

Gianares is one of four Hinsdale performers in the cast and crew of 24. Fellow Hinsdaleans include sophomore Emma Francis, who performed a scene as Amanda from "The Glass Menagerie" and juniors Olivia Schaff and Lorraine Healy. Schaff resurrected monologues by Alice from "You Can't Take it With You" and Shelby from "Steel Magnolias." Healy portrayed Lucy in a scene from "You're a Good Man, Charlie Brown" and M'Lynn from "Steel Magnolias."

"The two parts are very different," Healy said. She enjoyed both, but found the part of M'Lynn, which is much more serious and sad, to be the more fulfilling role.

When it came time to record the scenes, individual students came to the Nazareth media center to perform in front of a green scene. Sound and scenery were added, post recording, by members of the tech crew.

"When we filmed, the only person without a mask on was the kid speaking," White said "We were very careful."

Introducing each segment of the show is a Nazareth theater alum. The introductions include a short synopsis of the show, along with a memory from the alumni's own performance.

"It's just so special," White said. 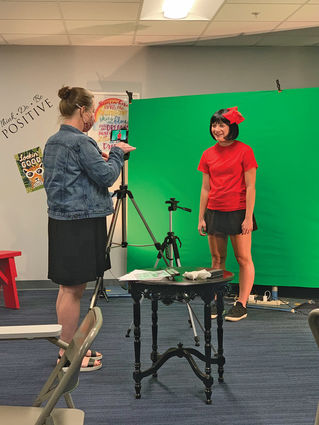 Laura Claxton, media specialist at Nazareth, is busy assembling and polishing the final product, which the cast and crew will enjoy in a socially distanced premiere Saturday night.

"We're treating it like a Hollywood opening," White said, complete with red carpet. Some cast members, she said, are using the opportunity to debut the prom dresses that they didn't get to wear last spring due to the pandemic.

White said the Fall Showcase is a lesson in finding the good in a bad situation. And after a long career filled with memorable experiences and successful performances, she said the 2020 Fall Showcase is sure to stand out as one of her proudest moments.

"It's something that's going to be really beautiful," she said.