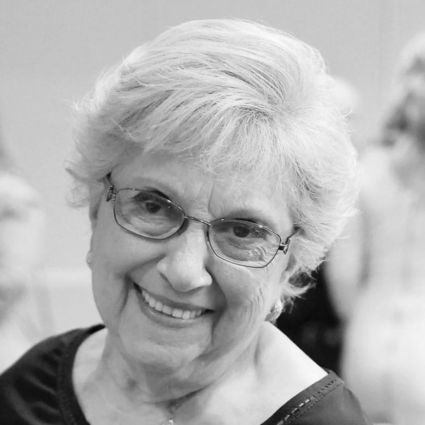 Ann Marie was born in 1930 in Chicago. She was the eldest daughter of Peter and Margaret Volpe, nee Arvia.

She married Robert Johnson in Chicago in 1953 and had one daughter.

Ann Marie became a widow over 32 years ago, but did not dwell in her grief. She trusted in the promise of the Gospel and the promise of eternal life in Christ. Many faith-filled discussions filled her days during the last weeks of her illness.

Ann Marie was an encourager. She was a present and patient matriarch of her large family. She was the cornerstone that provided a safe place of unconditional love. She was the shelter for others when they faced trials, yet she provided salted correction with warmth and attention. She was intentional, and her family valued her focused presence in their lives. She cried tears of joy more often than tears of sadness.

She loved to cook for her family and was determined to teach her skills and pass on recipes to her grandchildren. She found knitting a peaceful pastime and was donating her pieces to local charities up until her illness. And to those who knew her sharp mind, no one could ever beat her in her word games. She was a homemaker for most of her married life, but joined the staff of The Doings in Hinsdale in later life.

She is survived by her siblings, Angelo (the late Janet) Volpe and Annette (the late Guy) Snell; her daughter, Marjorie (William) Thorsness; her grandchildren, Bill (Kendyl) Thorsness, Robert (Sarah) Thorsness, Jonathan Thorsness and Elizabeth (Bradley) Heit; her great-grandchildren, Taylor, Billy, Annabelle, Lydia and Madelyn Thorsness; and many nieces and nephews.

Memorials may be made online to the American Diabetes Association at https://www.diabetes.org or the Caring Network at https://www.caringnetwork.com.