Fires in the west spark man into action 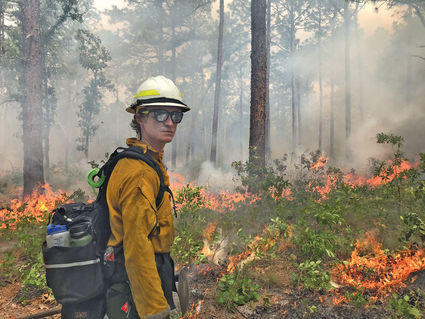 Wildland firefighters head into backcountry of the Trinity Alps Wilderness in Oregon last month to combat the Red Salmon Complex Fire. Hinsdale's Rhys Louis was among the team, which was later redeployed to the Slater Fire in northern California. Louis said he's learned a lot in his rookie year on the job, such appreciating the calm periods and knowing when to cut one's losses and pull back. (photos provided by Rhys Louis)

Rhys Louis has spent the last two weeks near the evacuated town of Happy Camp, Calif., near the Oregon border.

The name belies Louis' purpose for being there: fighting forest fires.

"We arrived and were immediately plugged into the lines, and we fought the fires through the town of Happy Camp, trying to keep the fires out of as much of the town as we could," said the 27-year-old wildland firefighter and Hinsdale native, reached by phone on Sunday.

The so-called Slater Fire is just one of the dozens of conflagrations scorching the landscape up and down the West Coast. Louis went to the region in August from his job conducting prescribed fires in North Carolina. He contracts with a private firm, working alongside crews from state and federal agencies and counterparts from around the country

"We go on what are called 'rolls.' We get an order to an incident, and the usual duration is two weeks or until they no longer need us," he explained. "The division that I'm on right now has engines from Maryland, Idaho, New Jersey, Oregon and someone from Wyoming," he said.

The primary task for Louis and his team members on the scene is to ensure that moderate fire activity is extinguished.

"The resource that I'm on is called a Type 6 Engine. It's a big pick-up truck that can carry 375 gallons of water. I'm on a three-person crew," he said. "It gives us the ability to go in to the woods where big engines can't. We're trying to keep fire at a low intensity to consume fuel but not jump our line."

They rely on hand tools to get the job done. And without the protective gear that urban firefighters use - including no oxygen tanks or masks - they get out if things starting breaking badly.

"We don't' carry that type of equipment with us. We wear fire-resistant clothes, which is just pants, a shirt and a hard hat," Louis said. "Those masks are flammable and will melt and stick to your face. We don't wear steel-toed boots because they'll cook your feet.

"We try and stay a good distance away as much as we can from anything too big going on," he added.

It's been quite a year to be a rookie in the field. Louis followed his interest in forest management to a basic training course at North Carolina State University, where he learned how to conduct prescribed fires. He is based in North Carolina but got the call to sign on with an Oregon-based contractor to assist the effort in the west.

Shifts typically last from 6 a.m. to 6 p.m., but putting in longer days when necessary goes with territory. Sometimes they pitch tents, other times they just sleep on cots set up along the road. Local authorities often provide catering, but Louis has had his share of ready-to-eat meals (MRE).

He was enjoying some sunshine on Sunday after going a week under smoke-choked skies. The toughest part is watching a fire have its way with people's precious homes.

"When a fire gets rolling and we cannot stop it, we pull out and leave," Louis said. "I've seen structures burned. I've seen entire hillsides and wilderness areas go up."

As a first-year firefighter, Louis admits he's "really at the bottom of the food chain" and expressed confidence in those leading the efforts to contain the devastating flames as much as possible.

"There's a lot of experience out here. The people definitely do know what they're doing," he remarked.

"Perhaps the most dangerous thing out here is the steep terrain and the possibility of slipping and falling off of it," he said.

As experts point out - and as Louis has learned - fires are a natural way forests regenerate themselves.

"Almost anywhere west of the Mississippi River, fire is part of the ecosystem," Louis related.

But as more people move into wilderness areas, and forces such as global warming, logging restrictions and poor forest management form a perfect storm for such disasters, Louis believes new approaches are needed.

"This is not a simple problem to solve. There is no silver bullet," he said. "We need to look at where we live and what risks we're wiling to take. All of these factors are coming into play."

As of Tuesday, the Slater Fire had reportedly burned through 148,677 acres and was only 22 percent contained. Soon Louis' team will head to the next danger zone. He doesn't know when his tour will finish.

"We all want to come home at the end of the day, but there are inherent hazards with being here," he said.