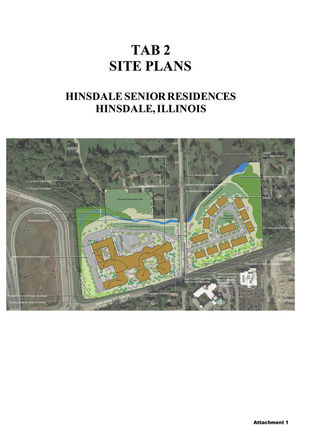 Ryan Companies has modified its plan to build a senior living facility at Ogden Avenue and Adams Street. The portion of the proposed development east of Adams sits just south of the area McNaughton had hoped to develop.

As the Hinsdale Plan Commission unanimously rejected one development proposed for a portion of the IBLP property on Ogden Avenue, the Hinsdale Village Board is poised to send them another.

Hinsdale trustees Tuesday discussed a revised proposal from Ryan Companies for a 240-unit senior living facility on 32.5 acres at Ogden and Adams Street. The existence of two separate proposals for two separate areas of the Institute of Basic Life Principles property has confused some residents, Village President Tom Cauley said.

The McNaughton development, which was not received favorably at last week's plan commission meeting (see story above), has not been discussed by the village board.

"McNaughton never came to the board. He went directly to the plan commission, which is his right," Cauley said.

Ryan, in contrast, came to the village board to request a referral to the plan commission. The board agreed and the plan commission held a public hearing on the proposal June 10, which was continued. The developer, after holding an open house with residents, withdrew his plan Aug. 27 and submitted a new one earlier this month.

Dave Erickson, Ryan's vice president of real estate development, told the board his company has worked to incorporate feedback from village officials and residents in the revised proposal.

"It's been nine months of listening and adjusting," he said.

One big change in the new plan is the move of 27 one-story villas to the east side of Adams Street on 21 acres adjacent to Ogden that Ryan has had under contract in March.

"We worked very hard with the seller to get this," Erickson said.

The developer also will widen the intersection at Adams and Ogden to create designated left and right turn lanes for cars exiting on Ogden.

"This is a commitment from Ryan Cos. to do this," Erickson said. "We felt like it was the right thing to do."

"We have 12 acres east of Adams which are intended to be for open space, for passive park space. We're really excited to give that to the village residents to enjoy," he said, noting the area is wetlands. "It's beautiful. It's a spectacular view."

Erickson said while COVID-19 has had an impact on skilled nursing facilities, Ryan's senior living facilities across the country have seen positive move-in rates despite the pandemic.

The project is a $110 million investment that will bring 400 construction jobs and 93-full time jobs once the facility opens. The property will generate about $18 million over 20 years for the school districts, Erickson said, but not add students.

Trustees decided to wait until their Oct. 6 meeting to vote on referring the development to the plan commission, in part because their meeting was held virtually.

"I will not vote for a project that I think residents have not had an opportunity to be heard on," Cauley said.

Erickson said Ryan plans to hold another open house, and residents can learn more about the project by visiting the company's website at https://www.ryancompanies.com.

"We're doing our best to provide different options for people to share their feedback," he said.