HJWC faces its own happy epidemic 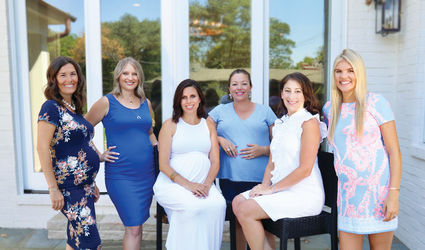 COVID-19 has gotten in the way of so many things this summer. But Kayla Weiss isn't letting it or anything else get in the way of her joy of becoming a mother.

"Everyone I've talked to who is pregnant right now kind of has the same view of COVID and pregnancy," said Weiss, who, along with at least five other members of the Hinsdale Junior Woman's Club, is expecting a baby later this year.

That's not to say that the pandemic hasn't played a role in these womens' road to motherhood.

Weiss and husband Brad were married in a simple civil ceremony late last year but were looking forward to a big celebration in 2020. Weiss had just enjoyed her bachelorette party and was looking forward to her wedding in April when everything changed. Not only was the wedding date pushed back, Weiss had just been told by fertility specialists that due to her medical history, she was unlikely to conceive naturally.

"I was fully ready that I would have to do some type of treatment or supplement," she said.

But two days after that news, she proved the doctors wrong.

Weiss said she is nothing short of thrilled about her pregnancy, but COVID-19 has had an impact. Due to safety measures, Brad wasn't allowed to accompany her to her appointments. That means he wasn't there to hear their son's heartbeat or to see his image during ultrasound screenings. But they've made the best of things. In late July Brad accompanied Kayla, along with her sister and mother, to a private imaging studio in Aurora. There, he got his first glimpse of his son.

The couple are looking forward to their son's arrival in December, but first, they'll enjoy a baby shower and celebrate the impending arrival of a new nephew. The wife of Brad's identical twin is due six weeks before Kayla. Both babies will enter an uncertain world, but Weiss is determined to make the best of it and enjoy every minute as she prepares for a December baby and a May wedding.

When fellow Junior, attorney and busy mom Katherine Schoon started feeling sick in March, she feared she had contracted the virus. She was fatigued, nauseous and had a sore throat - all signs of COVID-19.

"Turns out it wasn't COVID," Schoon said. With all the talk of the virus, it never occurred to the soon-to-be 40-year-old that symptoms might point to a much happier condition.

"Whenever I get pregnant I get cold-like symptoms almost immediately," said Schoon, who will happily welcome her third child, a son, in December.

She said there's a little more anxiety and uncertainty in this pregnancy. And like Weiss, Schoon has had to attend her appointments without her husband, Patrick. But she's drawn support from her friends and fellow Juniors who are on the same strange but happy path to motherhood.

"I've been really grateful," she said, for that support.

Sixth time is a charm

Bridget Nagel's road to motherhood has been a long and bumpy one. And just days after the world shut down in March, she thought she and husband Aaron had hit a major roadblock.

The Nagels had completed their sixth round of in vitro fertilization just three days prior to a nationwide halt in fertility procedures due to COVID-19.

"Initially they told us it wasn't successful," said Nagel, who wondered just how long they would have to wait before they could try again to start a family. "We thought it was over."

But their future son proved everyone wrong.

"Our baby was a fighter," said Nagel, who is due at the end of November.

An IVF pregnancy requires a lot of ultrasounds. And while Aaron wasn't allowed to attend the first few, he was there for the 20-week scan. That's the appointment where they count the fingers and toes and ensure parents that they're having a healthy baby.

Like the other expectant Juniors, Nagel said pregnancy during COVID comes with challenges. That's especially true for first-time moms who can't attend the childbirth or baby care classes that are so often a part of pregnancy.

But she and the other moms-to-be can lean on one another.

"It's really just a unique group of women," Nagel said. "There's just so much support."

And soon, there also will be a built-in playgroup. Schoon said it's fun to think that all of these babies will likely be high school classmates one day. And they all will share the story of being a welcome surprise during a scary and uncertain time when joy and hope were needed most.