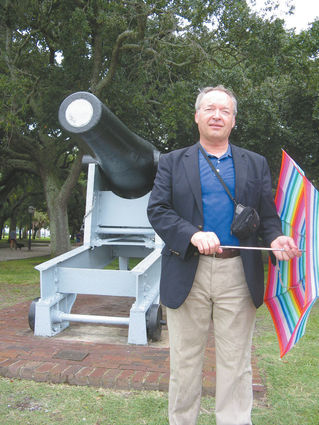 Author and historian John Horn compared his recounting of the Jerusalem Plank Road Operation of June 1964 to reconstructing a shattered piece of glass. The result of this long, intricate and painstaking process is part of Horn's latest book, "The Petersburg Regiment in the Civil War."

Published in 2019, the Hinsdale attorney's work was recognized in June with the Army Historical Foundation Distinguished Writing Award, an honor that Horn called "one of the happiest, most humbling moments of my life."

Horn's career as an attorney requires plenty of writing. And while building an argument for trial isn't the same as documenting history, the two tasks have real similarities, Horn said.

"You're building from step to step," he said.

Horn's interest in history goes back to his school days, when he won his high school's history prize. Years later, he married a girl from Virginia, an area rich with seldom told stories of Civil War history.

"A couple of my wife's ancestors belonged to the 12th Virginia Infantry," Horn said.

At the request of his wife's grandmother, he started digging into the family's genealogy and uncovered, among other things, a renewed fascination with the history of the country.

Horn said much of the literature that has been written about this chapter of American history focuses on the subjects of Robert E. Lee, Ulysses S. Grant and Gettysburg. But there are other stories to be told.

"There's more ground to be covered. There's so much that's not known," he said, including the uncovered story of a soldier from Tinley Park, then known as New Bremen, who won a medal of honor. Having learned the soldier's story, Horn worked with a group of fellow historians to purchase and install a marker for the soldier and the 39th Illinois Regiment at Poplar Grove National Cemetery in Petersburg.

"That's what historians do. They commemorate remarkable deeds," Horn said.

Horn's research continues as he works on his next book, about Grant's second offensive at Petersburg in June 1864. But amidst COVID-19, he's relying more heavily on the internet and electronic documents than ever before. In normal times, travel is part of his research.

Even his award, received in June, was announced and accepted via email. But that doesn't make it any less significant or make Horn any less proud.

While his research is keeping him close to home these days, Horn and wife Elizabeth Kelley are finding ways to satisfy their love of travel. They explored Bryce Canyon in June, hiked the Rockies in July and look forward to a fly fishing trip near Vail. And as soon as possible, Horn will be travel back to Virginia to visit relatives, walk the battlefields and dig into the corners of America's history.