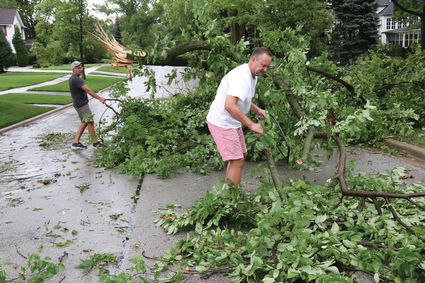 It takes a village - Tom Krasnewich and Bob Cloud took matters into their own hands and opened up North Washington Street shortly after a "derecho" rolled through Hinsdale Monday afternoon. The storm, which spawned several tornadoes across northern Illinois, traveled almost 800 miles and did most of its damage in Hinsdale on the north side of the tracks between Ogden Avenue and Maple Street. Village crews worked until midnight on Monday to open the blocked roads. Crews are expected to be busy well into next week picking up and chipping the fallen branches. Please turn to Page 15 for more photos. (Jim Slonoff photo)