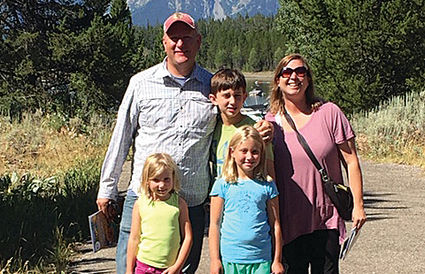 Grand Teton National Park was one of 13 national parks visited by Chris and Carissa Kapcar and their children, Jack, Lucy and Vivian, in summer 2016.

There are many lessons to be learned from seeing new places and welcoming new experiences. For the Kapcar family of Hinsdale, the first lesson of their epic 2016 journey to visit America's national parks occurred just seconds after leaving their driveway in their rented motorhome.

"We were RV rookies. We didn't know how to do it at all," said Carissa Kapcar, wife of Chris and mother to Jack, Lucy and Vivian, then 12, 8 and 5 years old, of their

Preparing the RV and stocking it for their three-week adventure across the country was all part of the fun. That is, until it all came crashing to the floor before even leaving Hinsdale.

"It all fell to the center," said Carissa, quickly dashing the family's romantic notions of travel via motorhome. With their belongings securely stowed, the family continued undeterred on an adventure that would take them to 13 of the country's national parks, with a few exciting stops in between.

After an overnight stop in Wisconsin, the family arrived at their first national park, the Badlands of South Dakota. They took in Mt. Rushmore, Devil's Tower, and listened to a night ranger talk about the land, its history and its many inhabitants. The talks became a favorite activity at every park on the Kapcar's trip.

"Those were great no matter where we were," Carissa said.

At each park, the Kapcar children also participated in the junior ranger program, earning badges that they still proudly display on their

From the rocky formations of the Badlands, the Kapcars headed toward the forested, snow-capped mountains of Glacier National Park in Montana. There they hiked, went horseback riding and took a shuttle to the top of Going-to-the-Sun Road, a 50-mile-long path that climbs 6,600 feet into the Rocky Mountains.

Having done their research, the family arrived at the Glacier National Park ranger talk wearing shoes suitable for hiking and bells to keep the bears away, only to be told that bells did little beyond labeling the wearer as a tourist. The ranger said talking, clapping and singing were far better ways to deter bears than the clang and chime of bells.

Aside from an encounter with some uncomfortably fresh bear scat, the family managed to avoid running into anything dangerous. Carissa said the children took seriously the junior ranger oath to care for the land and to leave only footprints. That became especially evident in Utah, where Jack's promise to "leave no trace behind" nearly sent him over a cliff in an attempt to retrieve a water bottle that had slipped through his hands.

Concerned that he had broken his oath, Jack and Chris returned to the area to retrieve the dropped bottle, only to come back with a collection of discarded containers, one of which was decorated with the words

During their journey the Kapcars saw rocky cliffs, dense forests and snow-capped peaks. They experienced temperatures that ranged from stiflingly hot to frosty.

In Yellowstone, they rode out onto the Great Plains in a covered wagon, admired geysers spewing water from the earth and stopped to let bison cross the road.

"Everyone should go to Yellowstone," Carissa concluded after her visit. "I felt so patriotic there."

The Kapcars' route was carefully planned, but not so carefully that it didn't allow for some unexpected discoveries. When they happened to drive by something called a buffalo jump, they stopped to investigate and learned about a part of history that the parks themselves didn't offer.

In the Grand Tetons the family went whitewater rafting, and in Jackson, Wyo., they were entertained by an Old West-style shootout and the first restaurant food of their vacation.

After nearly two weeks in the RV, a single night spent in a Salt Lake City Hampton Inn was a luxury, Carissa said. Taking a break from the great outdoors, the family spent hours watching television and soaking in the room's air conditioning.

"You would think it was the Four Seasons," Carissa said. 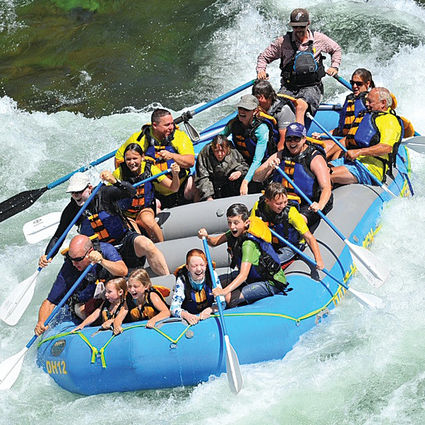 Whitewater rafting was a highlight of the Kapcar's visit to Wyoming and the state's national parks.

After refueling at the hotel, it was back in the RV to explore the parks of Utah, including Bryce Canyon, Arches National Park and Zion, where they hiked The Narrows, a 15-mile stretch where the Virgin River carved its way through rock.

"I'm so grateful we did that," Carissa said.

A stop in Colorado to visit family was the last before heading home. With thousands of miles behind them and countless memories made, Carissa said the family returned to Hinsdale with a new appreciation for the beauty of the country, the smooth ride of their minivan and the comfort of their own beds.

Like most families, the Kapcars are staying close to home this summer. But when circumstances change, they plan to add Joshua Tree in California and Acadia in Maine to their list of the country's natural treasures explored.

"We do love the national parks. You love them all for different reasons," Carissa said.