Doctor dedicates career to caring for the underserved 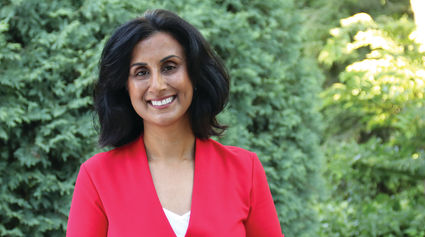 Suja Mathew's first encounter with Cook County Hospital, now known as John H. Stroger Hospital, wasn't as a physician or even as a medical student. It was as the daughter of a critical patient.

That experience 30 years ago led Mathew from a career in foreign service to one dedicated to providing care for underserved populations. Today as chair of medicine for the Cook County Health System, Mathew considers it "a profound privilege" to help lead the team at the same facility that saved her own father's life.

Her post entails overseeing delivery of internal medicine, neurology and dermatology services at John H. Stroger and Provident hospitals. While ensuring quality care for those in need today, Mathew also plays an active role in educating the doctors of tomorrow.

She served as the program director of the Stroger internal medical residency program, one of the largest internal medicine programs in the nation, and has served as a teacher and advisor to countless young doctors.

"We really make a contribution to the care of the county," Mathew said of the students, interns, fellows and residents who learn under the expertise of the Cook County Health System doctors.

She sees the toll that the cost of healthcare can have on patients and their loved ones. As a physician, she has dedicated her career to serving those in need of care but with limited financial means. A longtime resident of the Chicago area, Mathew left home at 14 to study at the Illinois Math and Science Academy in Aurora.

"That in many ways changed the course of my life," she said, citing the school's role in shifting her career goals toward medicine.

Mathew's reach goes far beyond Chicago. She has been a fellow of the American College of Physicians since 2010 in recognition of her contributions to the practice of medicine. She was governor for the ACP Northern Illinois Chapter from 2016-2020, is a member of ACP's Health and Public Policy Committee and Membership Committee and was awarded the ACP Quality Champion Award in 2015 and 2016.

Mathew currently sits on the Board of Regents of the American College of Physicians, the main policy-making body of ACP. She and her fellow regents set policies and expectations for the delivery of care among the organization's nearly 160,000 member physicians.

Before March, Mathew's role with ACP required a good deal of travel. Now, with Board of Regents meetings taking place remotely, the busy doctor has a little more time to spend with husband Jake, their two sons, and Mathew's mother, who shares their home.

Reflecting on the unexpected path she took in regard to her college major and choice of vocation, Mathew said the mission behind her life's work has remained the same.

"I was looking for work that would allow me to care for the underserved. That's what I'm passionate for," she said.