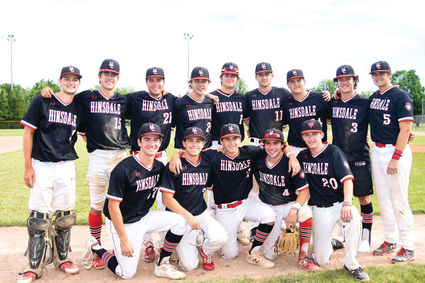 all team captain Charlie Williams learned this spring that the season was over, a goal he and his teammates had been working toward disappeared overnight.

"We were basically told the whole time that we're working to play our senior year," he said. "That was gone. That was a huge bummer."

Williams and the other seniors on the team had been playing together in Devil Baseball since the program was founded. And they hoped to contend for a conference championship this year.

"They've been together since they were 12 years old. All 14 were going to be on varsity baseball with Coach (Jason) Ziemer at Hinsdale Central," said Jim Anderson, whose son, Mitchell, was on the team.

The boys were the oldest group when Mike Giunta and a group of parents formed the Hinsdale travel league to give players in Central's attendance area the chance to play together. The teens finished what they thought would be their final season in travel ball last summer as 17-year-olds.

But when this year's high school spring season was canceled due to COVID-19, Giunta and other parents, hoping to give the boys one final chance to play together, put together an 18-year-old team and signed up to compete in a July tournament in Wisconsin.

But it was only May, and there was a chance either the tournament would be canceled or the team would be unable to travel.

"We all really wanted to go," Williams said. "The parents had set up everything for us. The tournament before us had gotten canceled because of coronavirus."

Fortunately, Illinois moved into Phase 4 and all was deemed safe for the boys and their families, who headed up to Lake Geneva earlier this month. Stepping on the field for the first game was quite a moment, Williams said.

"It was just a great feeling. I actually pitched the first game. I haven't gotten to pitch in a long time. It felt awesome to be out there," he said.

"I was so excited to be on the field again, seriously," he said. "It was almost like an adrenaline rush - 'I can't believe I'm back!' At that point we probably hadn't played a game in over a year and not (had) many practices before that, either."

That didn't stop Jackson from performing at this best.

"I actually hit better than I ever have, to be honest. I don't really know what happened," he said.

The team ended up winning one game and losing two.

"I don't want to say we didn't care what the score was," Williams said. "We were so happy just to be playing with our whole team all together again. I think that is what we were mainly focused on."

One of the most memorable moments of the tournament, according to Williams, was when a couple of the coaches promised Tom Jurack $10 if he could hit a home run with a "joke" bat.

"He actually hit a home run," Williams said. "We all went nuts."

The parents enjoyed themselves as well.

"At the beginning of the summer, we thought they'd never be on the field one more time," Anderson said. "It was a very satisfying way to end their baseball career, to see them together one last time when we thought it was over. There were a lot of watery eyes."

Mike Giunta said watching the boys play has given their parents so much joy over the years, and he was happy to see them enjoy what, for most, will be their last time playing organized ball.

"It was magical for the boys," he said. "They really genuinely appreciated the gesture of the parents pulling it together, but I think other feedback from the kids and parents was they finally had some closure to their career as well."

The families took precautions before making the trip. All the boys tested negative for the virus, and when the team wasn't competing in Kenosha, the families spent their time masked and socially distanced at a resort in Lake Geneva.

Mike Giunta praised the players for their maturity and responsibility in handling this whole situation. Jackson said they were able to leave their cares behind when they were on the field.

"We were kind of having fun and playing baseball like we were young again," he said.