The market is on the rise 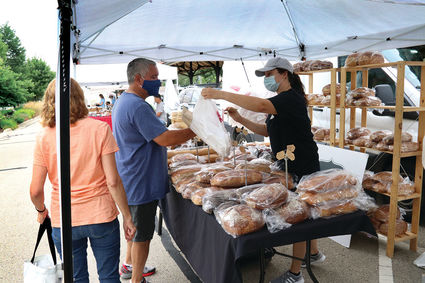 Mariesa Errico of ButterCrumb Bakery serves Tom and Heidi Comidi Monday at the Hinsdale Farmers Market. Vendors and and patrons say they are grateful for the weekly shopping event, with businesses relying on it to offset the drop in commercial sales due to the pandemic and visitors appreciating the array of healthy foods and the opportunity for social interaction. (Jim Slonoff photos)

The rain had mostly passed through by mid-morning Monday, freeing Hinsdale Farmers Market patrons from the need of an umbrella. Protection was still prevalent, however, in the form of face masks, as both vendors and shoppers took prescribed precautions under the cloud of COVID-19.

So has the pandemic dampened sales? Hardly, according to purveyors.

"We're about one and a half times busier than what we usually are. We can't keep up," Theis said, adding that his fellow farmers are experiencing similar spikes.

He had a sense the season would be strong when his farm had just about sold out of flower baskets by Mother's Day.

Signs at both ends of Hinsdale Chamber of Commerce-sponsored market, moved temporarily from Chicago Avenue to the train station parking lot on the other side of Burlington Park, prompt visitors to don masks, and those who don't feel well are discouraged from entering. Volunteer Nancy Keegan, a past chamber board member, staffs a table with complimentary masks and a large dispenser of hand sanitizer. Keegan has been struck by the amount of purchases visitors are making,

"Two ladies had to go back to their car to put stuff in and come back," she related.

Hinsdale residents Jackelyn and Taki Kastanis offer clues as to the market's attraction. The couple, with two of their children in tow, stocked up on produce at the Evergreen Farms stand.

Any destination these days is noteworthy, Taki suggested.

Jackelyn said the market has spurred some culinary experimentation.

"We've even tried cooking new foods. We tried out the beets in a beet salad. So we're trying out new recipes," she said.

Market newcomer ButterCrumb Bakery, based in Hickory Hills, found the farmers markets to be an viable alternative to their normal clientele of eateries when the pandemic hit.

"A life saver," is how ButterCrumb co-founder Gina Errico characterized it.

"We had to pivot a big portion of what we were doing, because a lot of business is restaurants, and a lot our bars and restaurants couldn't be open," she said. "To get out and be able to sell when the other part of the business is slower" is great, she said.

"People now, I feel, want to know what's going in their foods," she said. "I think people just want to be more aware, which is great for us."

The pair said they had no qualms health-wise about venturing into an in-person venue.

"Actually it was a lot of excitement to be able to get out here and talk to people about their food," Mariesa said.

Eliot Coleman was a victim of unfortunate timing, launching his Gigawatt Coffee just weeks before the stay-at-home order was issued. With his commercial aspirations stymied, he, like others, turned to

"It's really been a great experience," said Coleman, who's now selling at six area markets. "I think people are really kind of craving some interaction, and it's outdoors, so it's a much safer environment."

Market patron Monika Kazlauskas of Lemont said she stops by each Monday.

"It's something to look forward to, definitely, and I'm a fan of organic stuff. Homemade food all the time," she said.

"We just trying to expand our horizons. Hopefully the farmer's market will fund other sales channels," Jim said.

The Kastanis family is eager for other activities outside the home where they can feel as comfortable as they do at the market.

"We want more things like this because we can be safe," Jackelyn said.

And support small proprietors at the same time.

"Instead of leaving town, we stay in town and support local," Taki remarked.

Coleman said the social component is almost as rewarding as the sales.

"It's great to actually have a conversation with someone you don't know," he said. "We're not doing that enough lately."