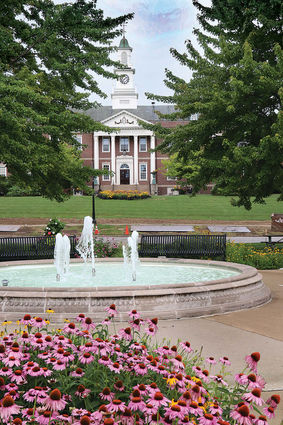 Real estate brokers in Hinsdale say the village has seen an active housing market during the pandemic with strong demand for homes offering more space for work and study. (Jim Slonoff photo)

The pandemic may be restraining a lot of business activity, but at least one sector in Hinsdale seems to be defying the economic quarantine: real estate.

She said unlike the Great Recession when there were too many listings for a financially insecure market, McKenna this season of tumult has spurred speculative buyers to take action.

"Everyone has just accelerated their time frame," McKenna related.

And with a healthy supply of inventory available to meet the demand, the result has been a steady stream of transactions.

"It's finally neck and neck, and it's switched from a buyers' market to a little bit of sellers' market," she said of the present dynamic.

Paul Mancini of @properties in Hinsdale also testified to the robust environment.

"I've never been busier," he said. "People who've been quarantined in their smaller houses are realizing that it's time for a bigger house. They're looking for more space."

He said sellers are in a good position.

"The supply is down compared to last year," Mancini said. "As long as you price your house right, you've got a good chance of selling it."

Back in March he feared the opposite. But high motivation for more comfortable living and low interest rates cast out those fears.

"These buyers want to take advantage of these low interest rates. They're going to get a good price on their sale and then turn that around and buy something bigger in the suburbs," Mancini related.

McKenna said that definitely has been true of young families migrating out from the city.

"There are a lot of people quarantining with kids, so they really felt what the different was between the city and the suburbs," she said.

"Space is something that everyone wants because some of these people are quarantining with their grandparents," she commented.

Most clients prefer an open floor plan, but one with versatility for adult and child functionality.

"Living rooms and other rooms that can be converted to a home office is a real priority," McKenna said. "Everyone wants some privacy."

"They realize that space is super-important to them. People see the value of nice yard," he said.

Jeremy Paris, a designer for Normandy Remodeling in Hinsdale, said his firm has been fielding requests for bedroom additions with other uses in mind.

"An extra bedroom adds value to the house, but the homeowners actually plan to use it as a home office," he said. "Families don't want to be fighting over that quiet space to get work done."

The lock down has also prompted homeowners to spruce up.

"Looking at the same walls for so long is driving people to want to update and do that kitchen remodel and bath remodel," Paris said, speculating that some vacation budgets are being reallocated.

Paris said his phone was definitely ringing more this spring than last spring. And he and his colleagues have adjusted to virtual consulting with clients.

"We're presenting cabinetry through pictures rather than through our design studios, so that's been different," he said. "Once people are comfortable, we've started doing more in-home meetings with masks and with proper distancing."

Mancini said open houses have been allowed since the state entered Phase 4, and buyers are taking advantage. Before a visit, though, he tries to lay solid groundwork by posting videos and virtual tours.

"A lot of buyers, before they make the trip out, they want to learn as much about the house as possible," he said. "That way we can make the most of everybody's time."

McKenna said staying connected with clients and her team was paramount, particularly through the early days of the stay-at-home order.

"We started doing Zoom calls the day this (pandemic) hit, educating people on what was happening," she said.

While the future is uncertain, McKenna predicted that as long interest rates remain low, the surge of activity will continue.

"You can justify a lot of things when you can amortize it over 30 years," she said. "There hasn't been this sense of urgency in a long time."

We asked Hinsdale real estate agents Dawn McKenna and Paul Mancini and home designer Jeremy Paris about property features that may take on greater significance in the wake of COVID-19.

People spending more time at home are likely to want more space to spend it in. But Mancini said there’s a limit.

“Size is important, but they don’t want anything huge. Bedroom sizes will be very important,” he said.

Some in the industry have forecast a trend toward closed-floor plans. Paris isn’t so sure.

“I think the open-floor plan is still everyone’s ideal for being together,” he said. “But it limits the places you can go to get away from each other.”

“People want some grass. They want a space for people to gather,” McKenna said.

Working from home may become the new normal for many, requiring room conversion in some cases, Mancini noted.

“I think a lot people are looking for a first-floor office. If it’s a husband and wife both working from home, they need separate spaces,” he said.