Firefighter candidate takes her own life 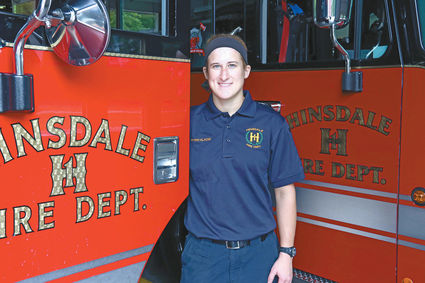 Nicole Hladik posed for this photo in the fall of 2019, shortly after she was hired as a firefighter/paramedic candidate. (file photo)

"It's a devastating loss for her family, and the fire department itself is a family. They are grieving the loss of one of their own," village manager Kathleen Gargano told The Hinsdalean Wednesday.

Village officials have been in contact with her family and brought in grief counselors to talk to her co-workers in the department, Gargano stated in a press release issued Tuesday night.

Hladik's uncle, Brian Kulaga, a lieutenant with the Cicero Fire Department, could not be reached for comment Wednesday.

During an interview on WGN Tuesday night, he said his niece had been very happy prior to switching her shift at the fire department recently. After that, her outlook became very negative. He said the family would like someone to look into what happened.

Wednesday morning the village hired an independent law firm to come in and conduct an evaluation, Gargano said. She had no information about the reasons behind Hladik's shift change.

Hladik was hired Aug. 2, 2019, with her 12-month probationary period set to expire in less than two weeks. She held a paramedic license from the Edward Hospital Paramedic Program and had worked at Ridge Ambulance and as a paid-on-call firefighter/paramedic in Western Springs. She was the only woman currently on Hinsdale's force and the third in village history.

"If I could make a nice long career here, that would be amazing," she told The Hinsdalean for a 60 seconds personality profile that ran Oct. 10. "It's nice finally knowing exactly what you want to do. I'm just grateful to be here."

In her statement, Gargano reminded those in need of assistance to call the National Suicide Prevention Lifeline at (800) 273-TALK (8255).