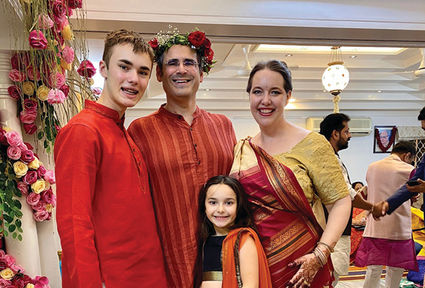 John, Jay, Betty and Katie Hines-Shah pose for a family photo at the wedding of Jay's cousin's son in India last year. Katie is wearing the sari she wore to her rehearsal dinner in 2002, and Betty is in a gold flowered skirt and black top made at the Shah family sari factory. Their hands and arms have been decorated with mehndi (henna).

The Hines-Shah family of Hinsdale had been to India before. They had even attended an Indian wedding before. But they had never experienced anything quite like the four-day extravaganza of 2019.

Jay and Katie Hines-Shah, along with children John and Betty, traveled to India over Thanksgiving last year for the wedding of Jay's cousin's son. Generations gathered for the traditional wedding celebration, which began with a family party at which the bride and groom's families exchanged gifts. The evening's festivities also included members of the groom's family dancing for one another. The Americans among them were not to be left out.

"I guess you could say horrible," 8-year-old Betty said of her and John's attempt at this new style of dancing. She was much more impressed with the Mehndi that was part of the second day's celebration.

"It reminded me of chocolate pudding," Betty said of the henna paste used to paint intricate designs on the women's hands and arms as a means of wishing the bride good health and prosperity.

Day 2 also included the traditional turmeric ceremony. Also known as haldi, the orange paste is said to purify and cleanse the bodies of the couple entering into holy matrimony.

The groom, John said, ends up "plastered in turmeric."

"Everybody gets to take turns doing it," he said.

After two days of celebration - each of which carried well into the night - Day 3 brought the long-awaited exchange of vows. But not before an extravagant parade through town, complete with a carriage pulled by white horses, loud music and plenty of revelry.

Because the youngest guests, including Betty, might find it difficult to walk the entire parade route, children were welcomed into the carriage with the groom. Katie said that unlike American weddings, which sometimes are exclusively adult affairs, children are welcomed at Indian weddings. Accommodations are made to ensure the comfort of the family's oldest and youngest members.

The many festivities required an array of traditional Indian dress for the Hines-Shah family. They arrived in India several days early to choose fabrics for their custom-made wedding wardrobes, created at the sari factory owned by the groom's grandmother and her family.

"Men's clothing is not nearly as elaborate," said Jay, who said he and John were quite comfortable in their kurta pajamas.

There also was a comfortable familiarity to the dress Katie chose for the second day of festivities. The sari was the same one she wore to her own rehearsal dinner back in 2002.

Day 3 finally brought the main event. The lengthy ceremony was performed in Sanskrit, which no one speaks or understands, Katie said. So while the priest read from the Mahabharata, guests were free to wander about enjoying a variety of food stations.

Betty took a liking to naan, an Indian flatbread, while John's favorite was petis. Intended as a snack, John contends that the stuffed potato balls also make a fine meal.

Following the final "I do," guests were treated to a fireworks show. But the celebration didn't end there.

Many members of the extended family of P.D. Shah, Jay's grandfather, attended the wedding. (photos provided)

Day 4 brought the reception, to which the bride and groom arrived along a misty aisle of dry ice. Katie said the men wore Western clothing while she and Betty enjoyed one more chance to wear their colorful Indian fashions.

"I felt like a Bollywood star," Katie said of the custom-made dress she borrowed from a friend for the final day of celebration.

Jay said his family's Thanksgiving trip gave him plenty to be thankful for. Born in the United States, he grew up rarely speaking to his father's family in India. International phone calls at that time were expensive.

Now, thanks to technology and social media, it's easy for Jay's family to stay connected across the miles. They exchange birthday greetings, simple hellos and congratulatory messages for little things like a good test score.

"It feels like our world is smaller," Jay said, and that loved ones aren't so far away.