Coach enjoys job whether on, off the ice 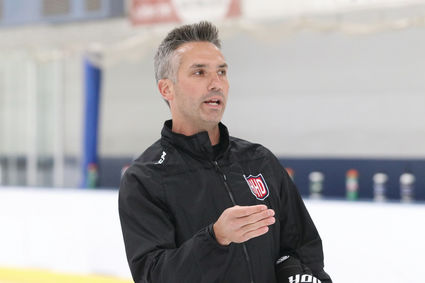 HHD Hockey owner Christian Hmura is happy to be back on the ice leading this training camp Tuesday at The Edge Ice Arena in Bensenville. He kept himself and players around the world busy during quarantine with Zoom training classes and now offers training through a subscription-based app. (Jim Slonoff photos)

Hockey has been part of Christian Hmura's life for as long as he can remember.

"I got my sixth, seventh and eighth concussions in the last nine months of me playing, and I just wasn't able to really bounce back, he said. "I had some major issues with that for while."

With his career as a player out of the question, Hmura, then 19, turned to coaching.

"Obviously I wanted to stay involved in the game," said Hmura, who is now 33 and a Hinsdale resident. "It was my entire life up to that point. It is probably the next best thing to playing."

He began his coaching career with a college in the Boston area before moving to Illinois to work with the Chicago Fury. He currently coaches for a number of organizations, including the Chicago Mission. Making the transition from player to coach is difficult for some, but Hmura took it in stride.

"It actually kind of came pretty natural to me," he said. "I'm not going to lie. I was always very observant as a player to how I reacted to a coach, especially later in my playing career as I got older and more mature and grew up a bit."

He knew the approaches he wanted to emulate with his players and the ones he wanted to avoid. And then there were some things he just had to figure out on his own.

"Obviously I made some wrong decisions along the way," he said. "I hit some bumps in the road."

Hmura works to offer the players he coaches similar opportunities to figure things out and learn from their mistakes. He describes his coaching philosophy as one of collaboration, in which he teaches basic skills and techniques and then encourages players to put those to use in their own way. He compared coaching to driver's education.

"There's nothing like getting in the car by yourself for the first time and no one has a brake on the other side and situations arise that you didn't see in drivers ed and you have to figure them out," he said. "Sometimes you cut someone off and you learn from it.

"At some point you need to release the kids' hands and let them go off on their own and figure it out for themselves."

Even though he has been coaching for 14 years, Hmura said his own learning process has not come to an end.

"I think I'm still ever-evolving. I think that every year that goes by, there are circumstances in hockey that you learn from," he noted.

The COVID-19 pandemic has been one such learning experience.

Hmura first heard about the pandemic when he was his 11-year-old son, Reid, in Norway, where they had traveled to watch Reid's godfather play hockey. Immediately after that trip, Hmura and his family headed to St. Lucia, where the pandemic was a distant reality. So his conversation with the Chicago Mission's hockey director came as quite a surprise.

"Dude, we are not going to be playing hockey right now," the director said.

"I'm really not believing it," Hmura said of his reaction.

He returned home on March 21, the day the lockdown went into effect in Illinois. At first he wasn't sure how to proceed.

"I was sitting there for two weeks," he said. "I was working out a bunch. There was nothing to do. I'm thinking of how we can stay in front of our customer base."

That customer base is the 3,000 to 4,000 players that have participated in camps and tournaments over the past five years through Hmura's company, HHD Hockey. He said he wanted to do something to give the kids a sense of normalcy, so he decided to offer a Zoom class.

"We really didn't know what to expect. I had never used Zoom before on my own," he said.

The platform offered free meetings for up to 40 minutes for 100 people, which Hmura thought would work out perfectly. He seriously underestimated the demand.

Hmura, who offered the classes for free, said he enjoyed them as much as the students did.

"I actually had a ton of fun doing it. It provided a sense of a regiment for these kids. Parents were telling me the kids were - on their own - planning their entire daily schedule around these classes," he said. "It was pretty cool to see."

As the spring progressed and the future of summer hockey camps remained in limbo, Hmura decided to take the next step with online coaching. He hired a video production company to film workouts and found someone to develop an app so HHD could offer a subscription interactive training service.

Sheltering in place has forced everyone to rethink how they accomplish things, he said, and has convinced him that hockey players can be trained from home.

"You can't mimic how you feel on your skates, but you can mimic all the other movements within your body on how it feels to do that skill," Hmura said.

If students are unable to return to school in the fall, the app could provide the physical activity they would normally get in gym class and the sense of fun they normally experience during recess, he noted. 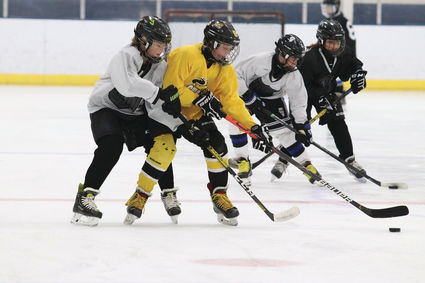 Since Phase 4 went into effect, Hmura has been back on the ice. The rinks still have strict protocols, he noted, but the kids are adjusting.

"We have not had a case of coronavirus yet in our groups, and obviously I want to keep it that way," he added. "I do think it's important to just keep taking small steps forward to get back to normality instead of living in constant fear."

Hmura said his perspective also has been changed by having a daughter. His wife, Amanda, gave birth to Shay three years ago.

"Everything in life kinds of changes and molds the way you react to things," he said. "I think it's an ever changing job. To be good at something, personally I think you need to keep tweaking."