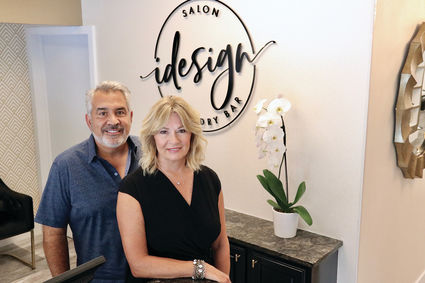 Terry and Tami Abraham, owners of iDesign Salon and Blow Dry Bar in Gateway Square, emerged from this spring's mandatory shutdown with a whole new look for their 20-year-old business. (Jim Slonoff photo)

After months without a cut or color, clients of iDesign Salon and Blow Dry Bar in Hinsdale are in for a treat when they return for their first post-shutdown appointment.

While its doors were closed to customers, the salon celebrated its 20th anniversary with a major remodel.

"People are blown away by the way the salon looks," said Tami Abraham, who owns the business with husband and hairdresser Terry Abraham.

Abraham said this is the third remodel in the 20 years since iDesign saw its first guest back in September 2000.

"This has been the biggest, most impactful remodel we have ever done," Abraham said. She described the updated salon as modern and bright, with smooth surfaces and clean lines.

"It feels like you're in a safe environment," Abraham said. And she ensures guests that they are.

The salon reopened May 29 with precautions in place to keep staff and guests safe. Sanitation, Abraham said, has always been key to the industry. But along with sanitizing tools for each client, everyone in the building is required to wear a face mask. Temperatures are taken on everyone who walks through the door. UV wands are used to sanitize tools and surfaces, gowns are washed after every use, and there are no magazines.

Every other chair is being used, to maintain a safe distance between clients. Guests can enjoy even more social distancing on the courtyard just outside the salon, which has been converted to a "processing patio." Clients sit at the patio's bistro tables, sheltered by a large tent, while their color works its magic.

To create room in the salon and time on the schedule for a long list of eager clients, hours have been extended to 8 a.m. to 9 p.m. seven days a week. The staff is divided into two teams, with one working at a time.

Abraham said it's good to have the iDesign family back together doing what they love most - creating beautiful hairstyles for women, men and children.

The staff prepared for the reopening with a brush-up on proper sanitation and training in the salon's new protocols. Then, they celebrated by giving each other's hair a much-needed sprucing up. Like iDesign's customers, the hairdressers themselves hadn't had a trim or a touch up in more than two months.

"There were a lot of tears shed. Tears of joy, of course," Abraham said.

Two of the more than 20 employees at iDesign have been with the business since the beginning, and several others have been there for more than a decade. Guests have longevity, too, said Abraham, citing children who came to iDesign for their first haircuts who are still coming in as young adults.

"The community is like our family, as well," Abraham said.

Abraham said she owes a big thank you to salon director Rachel Barnish. While the salon's chairs were empty, Barnish worked while furloughed to answer calls and even deliver hair products to customers' homes.

"We couldn't have made it through this whole shutdown without her," Abraham said.

Abraham said the salon's 20th anniversary certainly isn't the celebration they had planned, but she's proud to have survived the unexpected and to come back prepared for the years ahead.

"We're set up for moving forward for the next 20 years," she said.