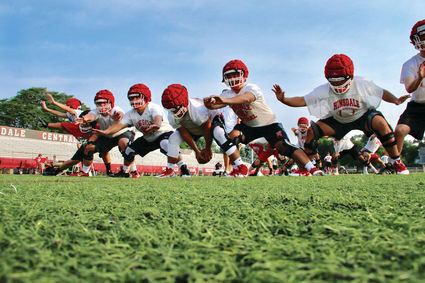 Hinsdale Central football players put in the work during a July practice in 2017. Because of restrictions due to coronavirus, the team has not been able to have any summer practice this year, and questions remain about playing the fall season. (file photo)

The Illinois High School Association announced its Phase 4 Return to Play Plan last week as Hinsdale Central and other schools look to restore their athletic programs amidst the coronavirus pandemic.

The guidelines, which were given a stamp of approval by the Illinois Department of Public Health, allow gatherings of up to 50 individuals indoors or outdoors, with multiple groups allowed outdoors provided they are separated by a distance of at least 30 feet. Athletes must be screened with temperature checks before every workout, and coaches and volunteers must wear masks (see sidebar for details).

"Then we'd open up registration and practice schedules," he explained.

"Safety remains at the forefront of everything that the IHSA is doing as we move into Phase 4 and beyond," said IHSA Executive Director Craig Anderson in a statement upon release of the Phase 4 guidelines. "Our focus now shifts to continuing to work with state leadership to determine how to provide the safest environment possible for fall sports."

Jones said he and his counterparts in the West Suburban Silver Conference have been working to craft plans for the possibility of returning to competition. He does not foresee allowing spectators, although they are permitted under the IHSA plan.

"We're looking to either live stream or film events and post them so family and friends can see those competitions," he said.

Figuring out capacity limits and spacing for camps will help officials prepare for the school year, Jones noted.

"We're going through all of our facilities and all of our fall sports to come up with a plan to get as many athletes participating and playing under the state parameters and doing it safely," he said.

Jones said he's been communicating with coaches to give potential scenarios about how practices might be run. For football, for example, the IHSA guidelines don't specifically advise against physical contact during but do discourage high fives.

Central varsity football head coach Brian Griffin said he expects there to be either no contact or limited contact once practices can begin.

"So you're going to have to reframe how you teach things," he said, alluding to recent measures promoting head safety that already has altered behavior. "We've gotten better at making it safe."

Griffin said normally the team would have had two weeks of camp in June and another two in July. He and his coaching staff regularly send players suggested workouts.

"We're trying to keep everyone engaged," he said.

"We're deciding on other ways to replace that experience with things that we can do locally," McCabe said.

Running has the advantage, he remarked, of being a sport that lends itself to self-training.

"I've been giving workouts to the girls, and the leaders have been administering them, organizing meetings in groups," McCabe said, noting that social distancing guidelines are being observed.

Seeing girls carrying that responsibility of leadership "might be one of the ways where you turn a potential negative into a positive," he remarked.

Not having access to school training equipment has required an adjustment, McCabe said. The fall season will not be business as usual, either, but he said they're preparing as if it will be.

"We're going to come into the season with the attitude that we always do, and then we'll roll with the punches," he said.

Jones said figuring out how to keep athletic areas sanitized in "the fastest and most efficient way" is also a major component, adding that the DuPage County Health Department also will need to sign off on the school's reopening plan. Getting kids back in the school is key, he stressed.

"If we have no in-person school, than I don't anticipate us having in-person sports," Jones said.

Griffin believes his student-athletes will be ready, whatever the case.

"I think the kids will be focused when we do get back together," he said. "We just don't know when that will be yet."

The Illinois High School Association last Friday released its Phase 4 Return to Play Plan to guide schools in resuming sports activities this summer. Here are some of the highlights:

• Gatherings of up to 50 individuals, indoors or outdoors, are allowed. Thirty feet of space must be maintained between gatherings of 50 when outdoors; the limit of 50 is the maximum no matter the spacing indoors.

• Athletes should be screened at the start of practice for temperature (must be below 100.4) and symptoms of COVID-19. Those deemed unable to participate can return only after clearance to do so from a physician.

• Athletic facilities should be cleaned before and after each use by a group of athletes. Equipment such as football helmets and pads should be worn by only one individual and not shared.

• At contests, group sizes should be limited to 50 total participants, coaches and referees; any additional team members can sit on the sidelines socially distanced.

• Spectators, if permitted, should be directed to a designated area with existing seating capped at 20 percent of capacity and allowing six feet of distance between families/household units.