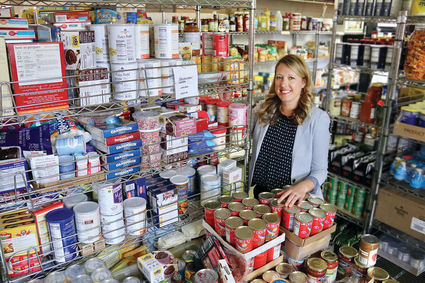 Amy Wickstrom accepted the role of executive director at HCS Family Services without ever setting foot inside her new workspace. With safety protocols in place and a spike in demand for food due to COVID-19, she comes to the Hinsdale organization at an unusual and critical time. (Jim Slonoff photo)

Service to her community has always been part of Amy Wickstrom's life. Her new job as executive director for HCS Family Services, she said, is the culmination of decades spent helping those in need.

"I just always wanted to help and to take care of people," said Wickstrom, who worked with March of Dimes, Boys and Girls Club of Chicago, and a San Francisco-based service for the homeless population before landing in Hinsdale. She also spent time working as a domestic violence probation officer and court liaison.

All of these experiences, Wickstrom said, have prepared her for her latest role as executive director of HCS Family Services, a job she started June 29. A resident of La Grange and mother of two, Wickstrom was chosen to replace retiring executive director Sam Cook as leader of the organization, which provides food for families in Hinsdale and 23 surrounding communities.

"It's easy for people to judge," Wickstrom said. But thanks to her experiences, she understands how life events, especially in early childhood, can shape a person for a lifetime and even generations to come.

As leader of HCS Family Services, Wickstrom said she hopes to help people overcome whatever is holding them back. In addition to food, she sees the potential for HCS Family Services to offer services like job training and housing support.

"Everybody has different visions for what they want the organization to be," Wickstrom said. Once she has a chance to settle in, she plans to work with staff and the board of directors to develop a clear plan for the organization's future.

"It's important to have a north star," Wickstrom said. "It's my goal to help people in any way that they need. If we can, then we should."

Wickstrom comes to the organization at a critical time. Food distributions have spiked by 60 to 70 percent since the COVID-19 shutdown began. The increased demand has also increased the need for funding. Meanwhile, the organization took quick and thorough measures to protect staff, guests and volunteers while still serving the community.

As COVID-19 hit in March, HCS Family Services responded quickly with a new plan for distributing food. With schools closed, HCS moved one of its two food pantries to the Anne M. Jeans School gymnasium, which continues to provide ample room for staff and volunteers to store and sort food. A drive-through service is used for distribution, protecting staff, volunteers and recipients from direct contact with one another.

Similar protocols are in place in Hinsdale, where the pantry inside Village Hall continues to serve as headquarters for HCS Family Services.

"It feels like it's more important than ever now," Wickstrom said of HCS Family Services. "There's an incredible need for food."

She said she's grateful for the community's generous support of HCS Family Services. Even through the pandemic, donations have remained strong.

HCS Board President Bob Lassandrallo said he can't find words to describe the crucial role that Cook played in the success of the organization, putting it on a path for growth.

"With that growth comes the need for someone to manage it," Lassandrallo said. He said Wickstrom not only has the background and experience but also the empathy and enthusiasm to capitalize on what Cook started.

"Our clients deserve to have an advocate in our executive director," Lassandrallo said. And in Wickstrom, he believes they've found it.