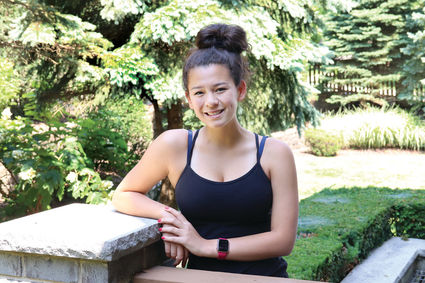 Hinsdale's Chloe Attlan and her partner made it to round nine of their first National Speech and Debate Tournament, held virtually last month. "It was a great experience. I'm really happy with how we did," Attlan said. (Jim Slonoff photo)

How do you prepare for an online debate?

Hinsdale's Chloe Attlan was elated in early March after she and debate partner Ajay Jejurikar won the district qualifier for the National Speech & Debate Tournament. Next stop, Albuquerque, N.M.

Then COVID-19 hit, and the event was suddenly in jeopardy. But the pair of rising Hinsdale Central seniors got to the national stage in a virtual form of the competition last month.

"It was a little different. It feels more like we're just interviewing each other," Attlan said of the online experience.

At the end of the day, however, it's less about the format and more about the quality of arguments, she stressed.

"The crux of a debate is just speaking, and that wasn't really impaired," Attlan said.

They took part in the public forum debate category of the June 14-20 tournament, which typically involves more than 4,500 students from upwards of 1,200 schools. The topic, provided a month earlier, was whether charter schools are beneficial to U.S. education.

Of course, interacting while not being right next to each other took some familiarizing, too, and they worked with peers to acclimate to debating via Zoom. A member of Central's Forensics Club the last two years, Attlan said the pursuit has been enriching on many levels.

"It teaches you how to think critically and also develop your public speaking, which are really helpful skills in life," she said.

Attlan said her chemistry with Jejurikar is a big advantage, stressing that the absence of a formal coach required them to be each other's chief encouragers and trainers.

"We've known each other for a very long time, so it's easy for us to communicate, and we're comfortable with each other," she said. "We give each other criticism, and we've come together to take up the leadership position in the (forensics) club."

With the normal two-hour after-school practices taken away by remote learning, the two had to strategize by phone and turn to online videos of accomplished debaters to help them polish their delivery. After a masterful district meet in which the pair went undefeated, Attlan knew nationals would ratchet up the intensity.

Teams compete in 12 debates over six rounds, trying to earn a spot in the elimination round. The 9 a.m. to 9 p.m. schedule was grueling, Attlan admitted, but she found her stride.

"I'm always a little nervous going into a competition, but once I get into it's much more relaxing," she said.

Their record of eight wins and four losses earned them a spot in the elimination rounds, where they reached round nine.

"That was exhilarating," she said. "We were both really excited about that."

Although her summer debate camp was a casualty of the pandemic, she and Ajay are using Facetime to stay sharp. And with nationals in Des Moines next year, the trip would be easy to make.

"Hopefully it's in person," she quipped.