Travel is the tie that binds for Martins 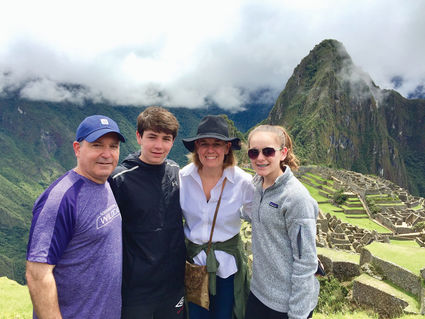 Moira Martin, who had been to 23 countries on five continents by the time she was in middle school, chose Peru as her favorite destination. She traveled there in 2018 with dad Chris (from left), brother Ronan and mom Natalie.

This summer, Ronan Martin had planned to celebrate his graduation from Hinsdale Central High School with a trip to Spain with dad Chris, walking the 220-kilometer road know as the "Camino" from Porto to Santiago.

The trip had to be canceled due to COVID-19, and it isn't the only one the Martins missed out on this year. Political unrest precluded a journey to Lebanon in March, and the alternative destination of Brazil was ruled out due to the pandemic.

Fortunately, the Hinsdale family of four has many overseas voyages to reflect on as they spend this summer at home. Asked to name their favorite destination, each member gave a different answer.

For Moira, who just finished her sophomore year at Central, it was Peru and the Amazon rain forest.

"It was such a different way of life and it was pretty largely uncivilized," she said.

With more luxurious accommodations already booked, the family ended up staying at a research facility that had recently opened to guests. Electricity was available only at certain hours of the day, and when it came time to take the river cruise they had booked, they had to trudge through the mud to get there.

"It was completely different from what I was expecting. I'm so glad I was able to have that opportunity," she said.

Ronan said Tanzania, the family's most recent excursion, was his favorite.

"I just felt it was really authentic," he said. "We went to three different places that were really different from one another."

The family spent time at the beach in Zanzibar, a market in Dar es Salaam and a game reserve, experiencing natural beauty and the chance to experience life from a native's perspective.

"Overall I like the authenticity of it and the exotic nature of the destination," he said.

Mom Natalie chose one of the family's earliest trips, which took them to Morocco.

"It was the first time to go on such a huge adventure and it made such an impression on all of us," she said. "We got the bug - especially the kids - to travel and be adventurous and step outside of what we we're used to and realize that the world is so incredibly large and diverse ... but at its core, we're all people, so you find common ground even if you're in completely different experiences."

Choosing a favorite destination is a little more difficult for Chris, as these family vacations are connected to trips he chaperones for international law students from Northwestern University, where he is a clinical assistant professor of law and assistant dean for academic affairs.

"I have a different set of students every time," he said. "It's almost like asking which is your favorite kid. I have all these students and I've had really good experiences with all of them.

That said, he identified the time the family spent in Thailand and Myanmar as most enjoyable.

"Myanmar had just opened up a few years earlier and was so uncommercialized that I loved it," he said. "Even just walking around Yangon was such a different experience. Everywhere else you go there will be a Burger King, a mall, a couple of nice coffee shops - fairly Western."

"For the most part you really had the feel of being in a different world there - although we stayed at a Best Western," he added with a laugh.

Chris said his course most closely resembles an investigative journalism class, and the individuals his students have interviewed have impressed him as much as the destinations.

"We met with a woman who spent five years in a concentration camp in Buenos Aires," he said. "She was kept alive because she was fluent in English."

The family tries to immerse itself in the local culture, Natalie said, which often means trying foods other tourists might never taste. Among their favorite meals are breaded chicken in Poland and traditional bread and coffee in Ethiopia.

The family also has traveled to Argentina, Chile, Turkey and France with Chris and to Ireland. Ronan has been to Switzerland, Germany and Austria on a high school trip. All appreciate the perspective they have gained from time spent outside of the United States.

"Growing up in the western suburbs of Chicago, it's kind of easy to feel like the rest of the world is just like this," Ronan said. "When you go all these different places, you learn why certain cultures value certain things. It makes it easier to understand where people are coming from."

Chris said he and Natalie knew from the first trip to Ireland that travel would be the activity through which the family would bond.

"We never joined a country club. We never got a lake house. We found out they enjoyed that," he said.

On the wish list for future trips are destinations that include Greece, China, India, Russia and West Africa. 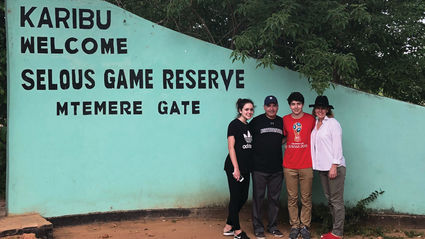 The game reserve in Tanzania, along with the country's beaches and markets, made the family's trip there last year a favorite for Ronan.

As parents, Chis and Natalie feel fortunate to have given their kids the chance to experience different places and different cultures.

"Travel allows you to have these amazing experiences and meet these amazing people and realize how big the world is and how much we have in common," Natalie said.

She didn't have that experience herself until she was 24, when she and Chris were getting married and he convinced her to finish law school in London. She's happy her children have had a different relationship with travel - and that they appreciate it.

"I just hope in the future I can do the same things on my own and for my family later on," Ronan said. "I think it's really important. It's fun, but it's also a great way to learn about things."

"I realized that travel really does allow you to have these amazing opportunities to keep traveling," Moira said. "I don't think I'd be where I am today without all the travel we've done."