Red Devils had an impact on teams 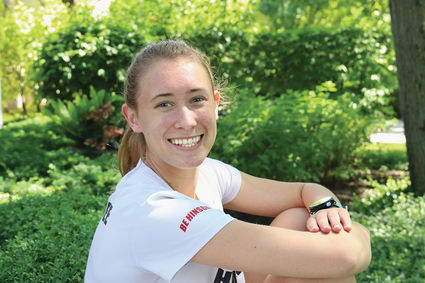 Athlete profiles typically are part of our sports pages throughout the school year, with a different team member recommended each week by his or her coach. With the spring season canceled due to COVID-19, The Hinsdalean altered its sports coverage, eliminating the round-up page on which the profiles ran.

We are happy to highlight these athletes now in a four-part series that began June 11. Today's athletes competed on the track, boys water polo and girls lacrosse teams.

What was it like not having a senior track season?

Of course it was super disappointing because I've been training for my senior year basically my entire life. It was really disappointing to not be able to compete in a season I knew I was well-prepared for going into and miss out on seeing my teammates as often as I would have.

When did you first start running?

I actually started running my first year in middle school when I was in sixth grade. I watched my sister (Reilly) run as she was going through middle school and that was really inspirational to me because I wanted to be just like her. My dad was a runner in college and he wanted all us kids to be runners as well. He knew how much fun it was and how many life lessons we'd be able to learn from the sport.

How did you end up running the 2-miler?

I kind of did everything over the years. I realized the longer, the better races are for me, so I gradually worked to the 2 mile. Through dedication and commitment to the sport, I've been able to drop my time significantly over the years.

Is there a moment in your athletic career that stands out?

For track season especially I think the big moment for me was the year (2018) that our team won the (4x800 relay) in state, but I only got to run the prelims (in order to run the 2-mile). I didn't get to run in the finals. I got to watch my sister and a couple of teammates bring the baton across the finish line. I ended up getting All-State for the first time in the 2-mile at that race. I owe it all to them to give me the courage to put myself out there and push myself during the race.

I'm going to be running at the University of Missouri. I'm currently undecided (on my major). That is the next big question.

I'm very thankful to the Hinsdale Central cross country program and to my coach for helping guide me through these part four years and aways being there for me and helping me become the athlete and person I am today.

Why did coach Mark McCabe like having Revord on the team?

McKenna is a highly accomplished athlete, with multiple All-State performances in both track and cross country both individually and with her team. McKenna is also like an assistant coach to me, and simultaneously a "mom," mentor and best friend to her teammates. Her character is second to none. Her strength, resilience and grit make her an excellent leader and an inspiration to all those around her. She is most certainly one of the "best of the best."

What was it like not having a senior water polo season?

It was definitely tough because it was my fourth year on the team and I was looking forward to having a senior season. It's something you work toward for years and years, so that was tough. It's kind of when you are supposed to be at your peak. You've been developing friendships for years on the team, and it's nice to be able to spend time with the guys in your final year.

When did you start playing?

Probably sixth or seventh grade. I started on a club team. My sister (Lauren) played when she started middle school, so I just kind of followed in her footsteps.

What do you enjoy most about it?

I like that it can be really fast paced and there's a lot going on in the water at all times. There are a lot of moving pieces to the team. I like that it's really tough, but when you put a lot of work in and your team starts to function really well, it's really fulfilling because the sport is really hard.

How did your teammates describe you on the senior video?

A lot of them said they found me entertaining and high-energy during practice. Some of them said I really took them under my wing. It was nice they recognized that, because I always make an effort to try and make them feel welcome.

Is there a game that stands out?

It was senior night last year and we were playing, I think, OP-RF, and we had all put on these really goofy tattoos on our body, these temporary tattoos but they looked really realistic. I had this big eagle on the back of my shoulder. It was just a really fast-paced, high-energy game. It was a really exciting game and a really fantastic win and we really had a lot of fun with it.

I've also been on the swim team. I'm a part of Breaking Down the Walls, which is an anti-bullying club, which is also run by Coach Brodell. (And) Business Professionals of America.

Why did coach Christy Brodell like having Hamp on the team?

Nathan has been a four-year varsity player. His ability to see beyond the game and to keep perspective has been Nathan's greatest contribution to our program. Nathan has made every member of our team, freshman to senior, feel included, no matter their skill level or experience. He never loses sight that our greatest mission as a team is to create a community where people feel welcomed, want to play and improve. I can't imagine what he would have done this year with the platform a team captain. I couldn't be prouder to have coached him all four years and have him represent him HC water polo.

What was it like not having a senior lacrosse season?

When we first started quarantine we didn't know how long it was going to last, so we never got a clear answer up until the end of March. For the seniors especially it really sucked, but we still kept doing our wall ball to stay with our sport. It really just felt like there was a piece missing.

When did you start playing lacrosse?

In third grade. Our family friend actually played and there's this league called IGLA that basically all the Hinsdale girls did. My grade especially has been playing together since then.

I think I've improved mostly with my attacking of the goals and within one-on-ones, because I went to a lot of off-season clinics which really focused on certain aspects of it.

I'm definitely one of the more relaxed people on our team, for sure, by far.

People just say M or Napes. That's about it.

Is there a game or moment that stands out?

Probably two years ago when we played New Trier in the championships. I got a pass from one of my best friends on the team - Avery Secola - and I ended up scoring off it. That was just a really cool moment.

What did you do in lieu of senior night?

Some of the underclassmen made this parade of cars for us during quarantine. They came to each of the senior's houses. Once they gave you the senior gift, you hopped in your car and went to the next person's house. It was really cool.

I was in Habitat for Humanity for a while and then I was also in a club called Strong Minds Bring Change.

I'm working with my dad at his dental office and I was going to coach some practices for Lake Shore Lacrosse, which is a club team.

I'm going to be playing at DePauw in Indiana. I was thinking about going into product design. 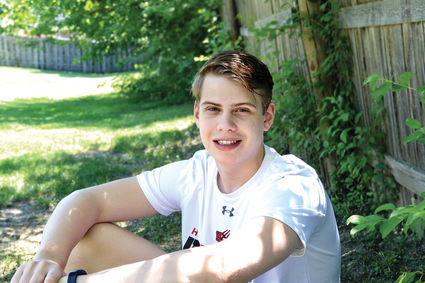 Why did coach Maggie Zentgraff like having Napier on the team?

Emily is a quiet but hard-working and consistent player. She loves to celebrate her teammates' successes and is extremely selfless on the field. She has come a long way as an attacker, working outside of school on her shooting and footwork, playing one-on-one with her sister to get better at defense and competing at the club level to continue to work on her IQ. She has worked really hard to become more creative on the field and after just a week of practice this year it was evident being a senior gave her a different, exciting and confident energy on the field. She is so much fun to coach and more fun to watch play.