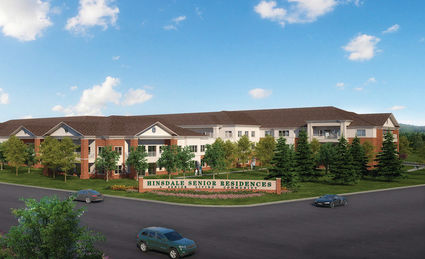 Ryan Companies originally designed a four-story building for the rear of the property at Ogden Avenue and Adams Street but has lowered that building to three stories and made other changes since running the proposal by trustees in January. The Hinsdale Plan Commission's public hearing on the development, now called Hinsdale Senior Residences, will continue at 7:30 p.m. Wednesday, June 24.

After listening to input from Hinsdale trustees in January, representatives from Ryan Companies appeared before the village's plan commission last week with a revised proposal for a senior housing development at Ogden Avenue and Adams Street.

"We've listened to the village board and we've updated our plans based on the feedback that we received," said Dave Erickson, vice president of real estate development for Ryan Companies, during a June 10 public hearing on the concept, held via Zoom.

"You have the full continuum of care on this property," Erickson said.

Ryan Companies is partnering with Life Care Services, the second largest operator of senior housing in the country, on the project. Erickson told plan commissioners the two companies have completed 10 projects together in the last seven years.

As part of the revisions, a building toward the rear of the property was reduced from four stories to three, with a two-story building facing Ogden Avenue, and the architectural style was modified from craftsman to a "Georgian expression." The setbacks along Ogden and Adams were also increased.

Additionally, developers revealed plans to make a $250,000 contribution to local parks and to change the community's name from Clarendale, which trustees did not care for, to Hinsdale Senior Residences.

Erickson highlighted the need for senior housing in the area.

The land itself presents some challenges, with flood plain/floodway/wetlands making up 23 percent of the site and a topography variation of 32 feet across the property.

Ryan Companies hopes to purchase the homes along Cheval Road, extend the road and use that area to create 17 senior living villas. That portion of the project will require clear title on the properties and approval from the village of Oak Brook.

Peter Reinhofer, project manager for traffic consultant V3 Companies, said the development is not expected to add significantly to traffic in the area.

"Senior living typically generates less traffic when compared to other potential land uses," he said, noting it would result in fewer vehicle trips than if the property reverted to an office building site.

When asked if vehicles exiting the complex could be expected to proceed south on Madison or Monroe streets, Reinhofer replied that use of local streets would be minor. Most drivers, he predicted, will travel on Ogden, Route 83 and Interstates 294 and 88.

"We feel that most of the traffic will be regional traffic coming from more than a mile away," he said.

The facade of the building will feature brick veneer masonry and fiber cement siding with an undulating pattern to create visual interest and movement, said Bryan Pugh of PFB Architects LLC.

Erickson noted that the development will create jobs, improve stormwater management in the area and add property tax revenue to the village and to the schools, while generating no additional students.

"We're excited about this development," he said. "It's a challenging property to develop. We're confident we can do that. We feel we're the right group to do that.

"We're going to invest a lot of money into the village and do it right."

Commissioners had several concerns about the proposal, including how many trees will be cut down, whether the new design fits the village's aesthetic, the traffic impact and the density.

Other Clarendale developments in Mokena, Addison and Algonquin have 156, 188 and 106 units, respectively, Commissioner Michelle Fisher said.

"Is there any way we could scale it down to be in line with those numbers?" she asked. 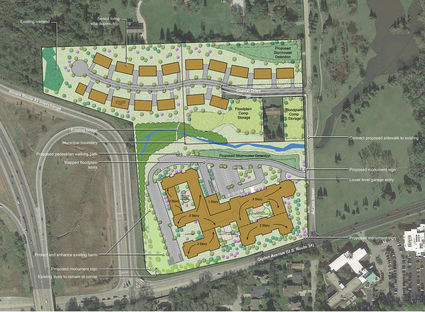 Commissioner Julie Crnovich suggested the developer hold a Zoom meeting with neighbors to take questions and clear up any misinformation. Some of the letters in opposition to the development mentioned the impact on schools, construction of condos and single-family homes, and McNaughton Builders.

Erickson told commissioners his company has had the land on the east side of Adams under contract since after the January village board meeting. He is aware that a plan depicting a four-story condo building has been circulated to neighbors.

"That is not what we're presenting," Erickson said. "We have not submitted any plans to the village. It does not involve a four-story condo building."

Commissioners voted to continue the public hearing, which went from 9:11 to 11:11 p.m. (following a public hearing on the proposed teardown moratorium), to a special meeting at 7:30 p.m. Wednesday, June 24, when residents will have an opportunity to comment.

Site: 16.8 acres at the northwest corner of Ogden Avenue and Adams Street, formerly home to Institute of Basic Life Principles

Zoning requests: approve a change from IB institutional buildings to R-2 single family residential and a special use for a planned development