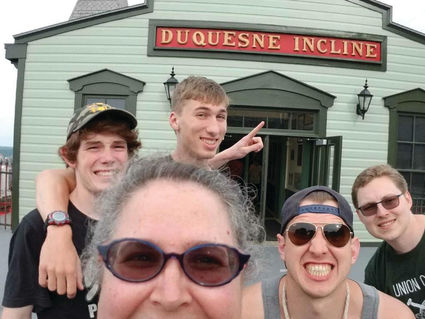 Members of a Union Church of Hinsdale outreach team work in the garden of a Baltimore church in June of 2019. The three adult leaders and three teens participated in a weeklong program designed by the faith-based organization The Center, which paired them with an African-American church in the city and conducted programs to reveal the racial, social, economic and political forces at work in the city. Members of the Union Church team that traveled to Baltimore last June included (in background) Henry Jonas Henning Lay, (in foreground) Cindy Lonhart, Grant Glowiak and Matt Kilens. (photo provided by Grant Glowiak)

Boundaries. Created for safety, in some cases. Others, as Grant Glowiak and a team from Union Church of Hinsdale discovered, may be subtle instruments of segregation.

Glowiak, director of youth ministries at Union Church, traveled with two other adult leaders and three high schoolers to Baltimore from June 7-16, 2019, to better understand the inner-city's racial, social, economic and political dynamics. A couple of days after arriving, the group was taken on a "social justice tour."

"You go from seeing major bank branches to check-cashing places, from no garbage to garbage cans overflowing, from large grocery stores to convenience stores," Glowiak said of the stark contrast between neighborhoods.

Team member Henry Jonas, now a rising senior at Hinsdale Central, recalled visiting one predominantly white enclave - not unlike Hinsdale - with one-way streets routed in such a way as to functionally restrict access from the lower-income, mixed-race neighborhood across the street.

"There wasn't a way to easily get into the white community from that side," Jonas said. "It was completely apparent what they were doing, and it was amazing to me."

That set the tone for the week's theme, "Boundaries."

The trip was a collaboration with the faith-based organization The Center, and the team served alongside a local, mostly African-American congregation, supporting outreach efforts in which the church was already engaged. During the day the team worked in the church's garden and community green space and participated in its soup kitchen ministry. Times of reflection were built in to allow team members to process what they were being exposed to. Evening programs explored different dimensions of disenfranchisement, like public transportation, economic opportunities and law enforcement.

"It became clear that the function of the trip was not only the work itself, but the experience that the kids get and the education that comes along with that," Glowiak said. "It gave the kids the tools to look critically beyond just, 'Oh, there are hungry kids and we're feeding them.' "

Adult leader Cindy Lonhart, a veteran of about a dozen youth work trips, said this one stood out.

"It was about the relationships we made with the people that live there," she said. "It was impactful in a way that we would have been unable to do by ourselves."

Lonhart cited a talk given one evening by a teen who had just graduated from high school with honors. A remarkable achievement, especially considering she's homeless.

"She's at the top of her class and she doesn't know where she's sleeping every night. She has no regular place to study," Lonhart said

Henning Ley, an incoming Central senior, said he was weed-whacking in the church's garden when a gentleman approached him offering some pointers.

"Later on when we were having a conversation, he told me that he had been sleeping on the bench that was right in corner where we had been doing the work," Ley related. "It was really cool that I got to connect with him."

Glowiak said he was inspired by the church's initiative to build a rehab facility adjacent to a vacant block that was the site of drug activity.

"They had the idea of putting the place that will help them stop using drugs next to the place where they're using drugs," he said.

Jonas said he had served in economically depressed areas before but had his eyes opened on this trip to the reality of systemic racism.

"I learned that if you're impoverished and in an inner-city and you're black, then it is harder to get out of poverty than if you are of a different race," he said, recognizing that Chicago is no different. "I learned that it truly has permeated everywhere and is in every city."

"You can't see what's happening in your own backyard," she said, referencing the white neighborhood with the one-way streets. "This was intentional. This is Hinsdale. The light went on and there was that 'Aha!' moment."

Jonas said he was struck by the contrast between Baltimore's inner-city and the federal buildings just an hour's drive away in Washington, D.C., on an excursion to meet with an advocacy group in the nation's capital. 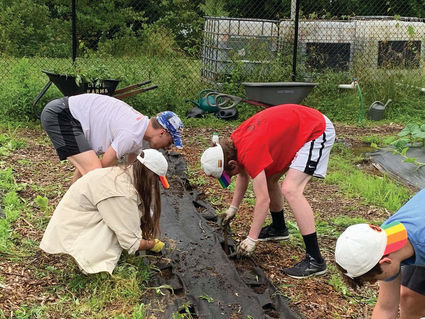 "You see the juxtaposition between the immense poverty of Baltimore and then you see the white columns of the Capitol Building and the White House, so that was interesting," Jonas said.

Glowiak acknowledged his perspective was transformed.

"I just have a lot more empathy for folks who live a wildly different existence than I live day to day," he said.

"I was able to interact with people in that community who are now speaking out against police brutality," he said. "It compels me to look at my own experience and my own privileges and see the different boundaries that separate myself and other communities."