Marchers circle boarded up businesses downtown, police chief says all is under control 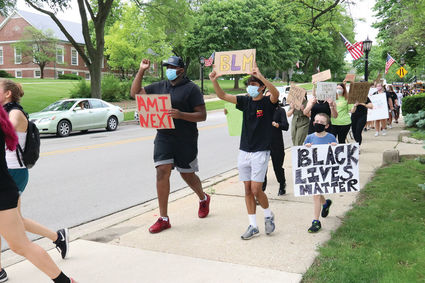 Hinsdale Central students, accompanied by adults and children, marched through downtown Hinsdale Wednesday afternoon, chanting "I can't breathe" and "No justice, no peace." The group made a stop in Burlington Park before repeating its route through the business district. The drivers of many passing vehicles honked and waved in support of the protesters. (Jim Slonoff photos)

Despite posts on social media that a planned protest for Wednesday afternoon in Hinsdale had been canceled, a group of more than 110 people marched through downtown Hinsdale before gathering in Burlington Park.

There, co-organizer Maiwen Amegadjie addressed the protesters, encouraging them to exercise their right to vote and find other peaceful means of ending racial oppression.

Amegadjie also alluded to the protective plywood several businesses had installed on windows in anticipation of unrest.

The recent Hinsdale Central graduate told The Hinsdalean she was buoyed by the number of people who have asked her how they can help, stressing that grassroots action is critical.

Her twin brother, Kiran Amegadjie, also participated in the march, carrying a sign that read, "Am I next?"

Karl Anliker, the vicar at Redeemer Lutheran Church in Hinsdale, said he and about a dozen church members attended the protest to stand in solidarity with the Hinsdale Central students who organized the event.

During one of the group's trips down First Street, a lull in the chanting was filled with the sounds of shop windows being boarded up. Others stores had emptied out all of their merchandise.

"This decision has NOTHING to do with the peaceful protest organized by high school students looking for a change, looking for respect for the African American community and to send a message of support to the family of Mr. Floyd for his tragic death. This is just a precautionary measure," she wrote, adding that she hoped to re-open today, June 4.

Police Chief Brian King said Wednesday morning he was not worried about the safety of businesses in downtown Hinsdale and noted there had not been a single incident of property damage in the village.

"We are not encouraging anyone to board up," he said.

Decisions to board up by business owners in Naperville, where peaceful protests were followed by looting, and Downers Grove were emulated by many communities in DuPage County, King said.

"Our message to the business community is, 'We've got you. We've put officers on patrol to a higher level.'

"If something changed in the area where we thought businesses should close or board up, we would communicate that message directly to them."

If rioting or looting did erupt, the mutual aid agreements Hinsdale has with other municipalities would provide additional officers, King said.

"We have plenty of resources that we can bring to town if needed," he said. "We've simply not found that necessary at this moment." 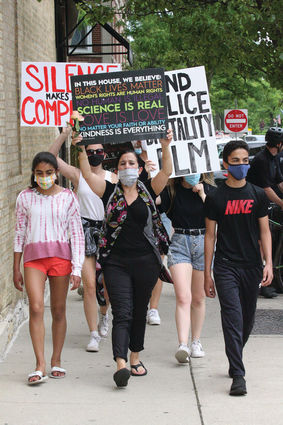 King said officers on Sunday and Monday were sent to support police departments in North Riverside, Oak Brook and Aurora to guard against looting at large shopping centers. In Hinsdale, a suspicious car spotted on Sunday left without incident.

"When the officers got in contact, (the car) immediately fled at high speed," he said. "We surmised that they were here to look for an overnight burglary."

He said officers had been assigned to the central business district through the night and the morning, and also were monitoring businesses on the village's north side.

"There's probably a little bit of a higher risk for burglaries and stuff like that," he said. "We're just keeping a presence."