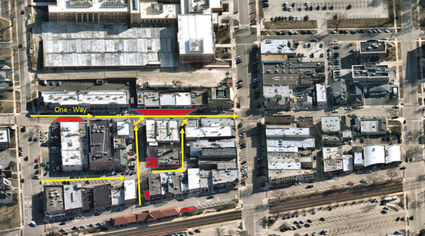 This map from Hinsdale police shows the traffic flow starting tomorrow in areas downtown where restaurants will be staging outdoor dining. In particular, First Street will be reduced to one-way, westbound traffic between Garfield Avenue and Washington Street. Derek Danylevsky power washes one of the concrete barriers crews installed this week on First to safeguard the dining areas against traffic. (Jim Slonoff photo)

That's welcome news to hard-hit business owners, who have been eagerly anticipating the state's shift into Phase 3 of Gov. JB Pritzker's Restore Illinois plan. The village has developed a plan to partially close First Street between Garfield and Washington streets to accommodate tables on the roadway, installing protective concrete barriers and allowing only one-way westbound traffic.

Peter Burdi, owner of First Street eateries Il Poggiolo and Nabuki, is eager to begin the next stage of recovery.

"We're obviously happy that they're allowing us to do that," Burdi said of the village providing use of the streets. "At least now there's another potential revenue stream. At this point it's just pickup and delivery."

The restaurants will offer lunch and dinner service, he said, noting that outdoor-only dining is proving a logistical challenge. Under state guidelines, parties can only be up to six people and at least six feet must separate the tables. In addition, he said Il Poggiolo has just added a pop-up version of Cine, his former Mexican restaurant in town.

"It's very hectic to put this together in four days. It's a different business model altogether," Burdi, citing procurement and arrangement of tents and chairs. "We're just trying to figure out how much space we have."

Access to bathrooms also poses a hurdle. Under the state guidelines, patrons can enter an eatery to use the bathroom, but Burdi expressed strong concerns with that from safety and liability standpoints.

Figuring out hours and customer admittance protocols has been a challenge for merchants. On Wednesday, shortly before The Hinsdalean went to press, the chamber issued a listing of store hours, indicating a range of approaches from regular store hours to appointment only.

Eva Field, president and chief executive officer of the Hinsdale Chamber of Commerce, said plans are in flux.

"I think it's going to be day by day," she said. "They've been able to hang in there. But this is a million times harder than what they've experienced before."

Restaurants must obtain a temporary use permit through the village to have on-street dining and must also sign an indemnification agreement. Alcohol consumption is permitted, provided it has been purchased from the restaurant. Tables should be sanitized after each use. Police Chief Brian King said the street closing plan has gone through several iterations, Presently, only First Street will be modified for motorists. Village Place also will be used for outdoor dining but will not necessitate halting traffic (see map). 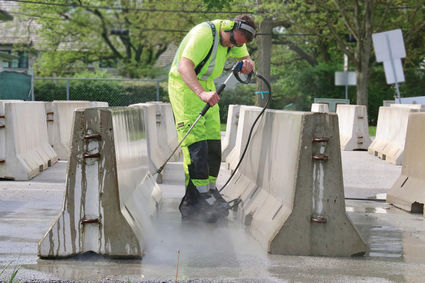 "There should still be plenty of available parking," he said, noting the traffic flow patterns may be revised in coming weeks. "Some zones will be designated for drop-off and pickup only."

The opening of the new parking deck in mid- to late-June will add even more capacity, said Gargano, emphasizing the village's desire to be responsive to the business owners.

Burdi believes the outdoor dining model will continue until officials deem it safe to resume full indoor seating. For now he's being optimistic.

"We'll just kind of see how it goes," he said. "We're hope there's a demand. If there's a demand, we're going to be open. I think the longer it goes, people are starting to relax a bit."

Hinsdale’s inviting array of stores and restaurants has long been central to the village’s unique charm. As these establishments prepare to welcome back customers tomorrow, residents are yearning to head back to their favorite haunts.

Jill Sunderson, chair of Hinsdale’s economic development commission, helped us reach out to residents to find out what they are looking most forward to when merchants open their doors.

“We are excited to support our favorite local restaurants as Hinsdale reopens. Dining “al fresco” with friends at Il Poggiolo is top of the list.” — Jerry and Pam Kallas

“I am going to stroll shop to shop like Julie Andrews singing, ‘The Dale is alive with the sounds of shopping.’ ” — Amity Comiskey

“I cannot wait to sit outside and have breakfast with my dad at Page’s. The staff there have helped my parents start the day for years, and it will be so good for my dad to see the team and have his ‘Kathy’s bacon’ in the sunshine.” — Kerry Lynch

“I absolutely cannot wait for my appointment at Levato Salon & Skin Lab and to be blonde again!! — Aleisa Woodward

“I am excited to bike with the kids down to Dips & Dogs for surprise ice cream. A nice way to kick-off summer!” — Jeanne Hendrie

“We are looking forward to walking to town to eat all three meals — YiaYia’s, Corner Bakery and Nabuki — on the very first day! — Elizabeth, Tom and Anna Claire Dziedzic

“Looking forward to getting my retail fix at Lepa — loving all their tie dye looks for summer!” — Katie Jones

“Sitting at the outdoor patio of Fuller House with my family devouring the wood-fired pretzel twist and cookie skillet!” — Grace Shin

“Our kids are way overdue for haircuts and we are really looking to some fresh summer cuts thanks to Zazu!” — Jen Cousino

“I am so excited to touch, and see up close, jewelry and clothing at Alixandra Collections. I am sick of online only shopping!” — Ruta Brigden

“I am looking forward to finding a special outfit and toy for my great nephew’s first birthday at My Sister Kate!” — Elizabeth Hodakowski