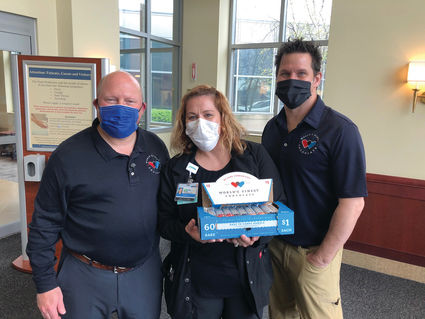 Eddie Opler (left) and Michael Mellon of World's Finest Chocolate pose for a photo with Nichole Cavanaugh, a nurse at Amita St. Joseph's in Joliet, during a delivery of chocolate bars last month. Opler and his company have pledged to get 10 million chocolate bars in the hands of front-line heroes. (photo provided)

Helping others is part of the culture at World's Finest Chocolate. So when COVID-19 restrictions were put in place, the folks who work at the Chicago company found themselves in unfamiliar territory, focused on their own survival.

"Our business is around doing good and helping people do the things they want to do through fundraising," said Eddie Opler of Hinsdale, who runs the company started by his grandfather in 1939. "That came to halt and it was scary and so out of our culture at World's Finest."

It didn't take long for Opler to come up with an idea to get the company back to its mission.

His plan? Get chocolate bars into the hands of people providing front-line medical care. Ten million of them.

"Ten million bars was just a number that came to mind because we were planning on selling a lot more than that this spring anyway," he said.

Opler kick-started the campaign by donating the first one million bars and then gave customers the opportunity to contribute. For each $30 or $60 box of World's Finest Chocolate bars purchased online, the company will donate a box. Those who want to donate both boxes have the option to do so.

It doesn't matter if it takes week or years to reach the goal, Opler said. What is important is brightening the day of health care providers.

"Every image you saw of what our nurses and doctors and first responders are dealing with was just daunting," he said. "Chocolate to me is this great thing that almost everyone loves completely. It just felt like the right thing if we could get in there."

"We work in about 30,000 communities with schools already, so they know a lot of people through those contacts," he said.

He's enjoyed being present for some of the deliveries.

"It was really fun. You could see people light up. Even though you couldn't see their smiles, you could see their eyes as they were holding up their chocolate bars," he said. "I was just blown away by the reactions."

About 1.6 million bars have been donated, and the next million likely will be released next week, Opler said.

"We continue to find places that want donations and so the word has spread," he remarked.

Although chocolate was deemed an essential business, Opler made the decision to close the factory for eight weeks, paying his employees for the time. Now the factory is up and running for its retail business, although anyone who can work remotely will continue to do so until at least August, he said.

"There's no reason to add extra people into the mix until we're all comfortable and get past the spikes that are in Chicago," he said.

Although several changes were made for employee safety (staggered start times, touchless time clock, face masks and shields), the manufacturing process did not have to be altered.

"All of our product is untouched by human hands to begin with," he said.

Opler and his team already have been forming strategies to help schools with fundraising in the fall.

"That will be the big question, how schools open up," he said.

When they do, they will need financial support, especially in the communities that have been hit hard by unemployment and underemployment.

"Because our products are low priced, we really support all (demographic) ranges, and the hardest hit ones are going to need money," he said. "They're going to need us more than ever, because people are still going to want their kids to do the things they've always done to participate and to learn and to have the resources to do that in every community."

The fundraising piece of the business was doing well before the pandemic, with projections for $150 million in fundraising this year.

Working through the uncertainty won't be easy, but Opler is confident World's Finest Chocolate will pull through and continue providing a product people want, perhaps now more than ever.

"It just puts a smile on people's faces," he said. "There aren't a lot of things these days that are doing that."