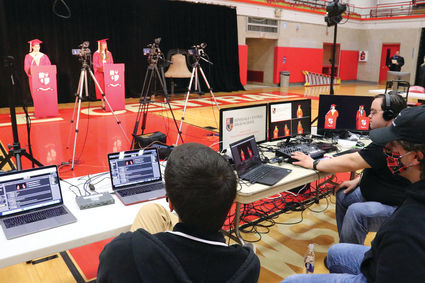 Virtual graduation director Blake Trchka (far right) oversees the recording of the ceremony with his production team. The ceremony will air online at 7 tonight at https://www.perfectshow.net/hchsgraduation. (Jim Slonoff photo)

Today is graduation day at Hinsdale Central High School, and it will be a student send-off like never before.

The ceremony already has been digitally recorded and will be watched tonight by the 678 graduating seniors alongside family at home instead of shoulder-to-shoulder with classmates on Dickinson Field.

"I think we started planning as soon as the restriction guidelines came out from the governor's office regarding the shelter-in-place through May," he said. "We didn't want to lose the (graduation) day of May 21. We wanted to honor our kids on this day."

That was the clear consensus expressed by students and families, for whom the notion of postponing the ceremony until some mid-summer date garnered little support.

"We met with a lot of different student groups and put out a survey on things they wanted," Maita said. "Their lives have been turned upside down, and we wanted to make sure they had a part in this."

He also met with Blake Trchka, Central grad and co-owner of Perfect Show Productions, which has been directing the school's graduations since 2008.

Trchka said the idea of a virtual ceremony was a departure from the norm but not outside his wheelhouse.

"We're familiar with the cadence and the important aspects of the ceremony for the school," Trchka said. "When the administration contacted us and was looking to move to a virtual format, we worked with them as much as possible to maintain the same feel as it was in person but in a digital format."

Essentially the occasion would need to be packaged both verbally and graphically.

"Behind the scenes we had to put together a Power Point that mirrored what we do in a normal setting," Trchka explained. "I'm very grateful for the tools that we have available, like HD cameras and nonlinear editing software, to make this possible."

The school's guidance department gathered information for student slides, making sure names were matched with any awards received.

On May 11 in the gymnasium, Trchka and his crew filmed the ceremony, including the address by senior Kayleigh Excell, a role she'd envisioned since beginning her Red Devil journey.

"I just got my letter from freshman year back in which we wrote a list of accomplishments we hoped for," she said. "One of them was to be the graduation speaker. It was just a reminder of all the hard work that went into this (moment)."

A Zoom audition last month helped prepare her for the unorthodox nature of this year's ceremony. Although a seasoned public speaker through her forensics team involvement, she is used to feeding off the reactions of her audience.

Thankfully she wasn't alone at the taping.

"There were a couple people there who are involved in the ceremony who I could get a reaction from. That definitely made it less awkward," Excell said.

She said her theme of class unity amidst changing circumstances would have been the same if given in person. Having to deliver it more than a week ahead of time, however, required some adjustments.

"I had an AP test that day, so I had to go home and curl my hair and get dressed. It was kind of a hectic day," she remarked.

Excell admitted her forensics habits surfaced when she nodded at the cameraman at the end of her address as she would to a judge at a competition. She sees a silver lining in the digital creation.

"You don't want to misspell their name," he said. "We're picking through them with a fine-tooth comb."

Faculty name readers usually are able to clarify any name confusion with students ahead of time. Remote learning hindered that this year, but doing it on video affords lots of do-overs.

Trchka said the post-production editing has taken time, from deleting unwelcome background noise to splicing out verbal slips. He estimated spending at least 35 hours on this project versus 20 to 22 hours in a regular year.

He's also incorporating a senior memories video and virtual performances of the National Anthem by the Central choir and "Pomp and Circumstance" by the Central band.

"It's just such a nice touch. You can still see the students perform. Over 200 students are participating virtually," Trchka said. "I'm really happy with how everything came together. I definitely think that this virtual ceremony showcases the best of the students."

Maita said he aimed to provide a commencement students could be proud of.

"My hope is that we give some joy to these seniors. We really wanted to put a smile on their faces and give them the recognition that they deserve," Maita said. "Hopefully this gives them something to remember."