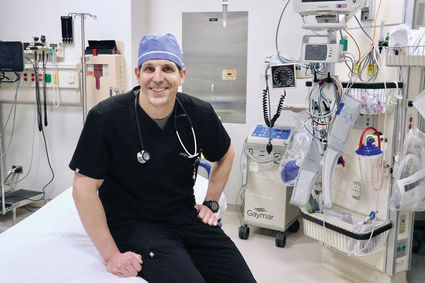 Social distancing and stay-at-home orders are flattening the curve, Amita Hinsdale Hospital ER medical director Dr. Herb Zerth stressed, but they will not eliminate the virus. "We still need to come up with a more effective treatment or a vaccine if we want to eliminate the problem," he said. (Jim Slonoff photo)

Dr. Herb Zerth is fortunate he's not working under the same conditions as his colleagues back East.

"I feel for the providers in New York who are just completely overwhelmed," said Zerth, medical director of the emergency department at Amita Hinsdale Hospital.

The staff in the Hinsdale ER is healthy, and they have access to the personal protective equipment they need, he said. With the stay-at-home order in place, the 26-bed department has not been overwhelmed with its usual cases. He estimated the department treats 10 to 20 patients a day who might have COVID-19.

Testing, which initially was a challenge, has improved. Over the past couple of weeks the hospital has been able to use a test that takes 24 to 30 hours to process. Before that, tests were either not available or took a week to 10 days for results.

"Now that we have some adequate tests, if patients come into the ER, (and) they are mildly ill, they would typically get a COVID swab and a chest X-ray if they have stable vital signs and look well," he said.

Many are sent home with isolation protocols, he said. Those with moderate or serious symptoms might undergo additional testing or be started on oxygen. Serious cases might require intubation, a procedure ER doctors are familiar with.

"The main difference now when we're intubating patients is we need extensive PPE," he said.

The doctors wear a PAPR, what Zerth refers to as a "moon suit," with a hood that contains a battery-powered vent to circulate filtered air. The procedure is performed in a room with negative air pressure so any contaminants will be circulated out of the building.

Intubating patients and putting them on ventilators was common in the early stages of fighting the virus, Zerth said.

"A month ago, the thought process was if these patients need more than a couple of liters of oxygen, put them on a ventilator," he said.

Statistics from New York show patients who were put on a ventilator had an 88-percent mortality rate, so doctors are employing other strategies.

Alternatives include using high-flow nasal oxygen and proning, or repositioning patients on their side, back and stomach to help them oxygenate.

Zerth said he has been surprised at how quickly patients' conditions can deteriorate.

"There are many people who are sick for 10 days and not feeling well - but not doing horribly - and then within the span of a few hours need to be put on a ventilator," he said.

The staff has not suffered too much of an emotional toll from treating COVID-19 patients, he said.

"It's fortunate - or unfortunate - that in the ER we're used to seeing very sick people," he said. "We're probably more prepared than most others in society to deal with this."

Support from the community has helped keep morale up as well.

"Every day we have had community members dropping off meals for the ED staff as well as donating PPE to us," he said. "It is certainly appreciated and reminds us how much the community values us."

Although the stay-at-home orders have flattened the curve, Zerth worries that fear is deterring some from having their health issues addressed.

"People are still having emergencies and they still need medical care, and I think people are scared to come to the ER," he said.

The department has very strict protocols, from scrubbing and using a special UV light to clean each room to making sure all patients wear a mask.

"The patient won't get one foot inside the building before a mask is put on them," he said.

And ignoring the need for care will have consequences, he warned.

"Even if you're postponing that belly pain that might be appendicitis or that bone that might be broken or some less serious infection, postponing the care will often lead to more serious complications later on," he said. "We will keep them safe. They still need to seek medical care when they think they need it."