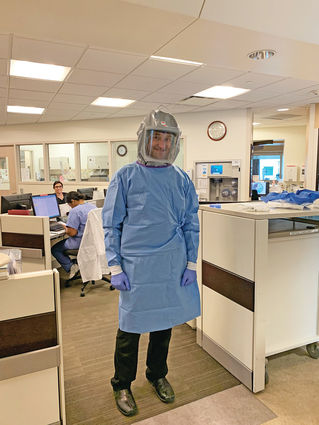 Dr. Hesham Hassaballa is suited up in his personal protective equipment in Rush Copley Medical Center's ICU, where he is the medical director. He hopes that this difficult season - by far the most trying of his career - will forge a healthier and more thankful society in its wake. (photos provided)

Just as lessons in handwashing have suddenly gone from banal to illuminating, critical care physician Hesham Hassaballa of Hinsdale had never contemplated needing instructions on donning his personal protective equipment.

A pandemic has a way changing one's perspective.

"We have PPE coaches that show us how to put it on and take it off," said Hassaballa, medical director of the ICU at Rush Copley Medical Center in Aurora. "I can't thank them enough for making sure we're doing it properly. They're showing me how to do it right."

The last couple of months have been paradigm-altering for Hassaballa, who has practiced medicine for 21 years.

In his role, Hassaballa was been deeply involved in the preparation for the virus as its nationwide spread became increasingly likely back in January.

"It was quite obvious, as the (Centers for Disease for Control) was talking, that it was only a matter of time before it was going to come here," he said. "We were working to figure how we can expand our capacity with the number of staff and ICU beds we can accommodate."

Soon patients began arriving in large numbers. This hospital had a sufficient supply of PPE (with many reusing their N95 masks), but an influx of staff was needed to handle the load. Thankfully, fellow doctors across various disciplines answered the ICU call for assistance.

"It's been really wonderful to have colleagues step up and help us, people stepping out of their comfort zone to help," he said.

The physical and mental toll has certainly stretched many to their limits.

"Everything was happening at once, and we struggled to stay above water. Patients were deteriorating," Hassaballa said. "We'll routinely stay longer than our shifts. Some of my colleagues have stayed almost the entire night."

Upon returning home, Hassaballa immediately takes a shower. He sleeps in the basement and, while not isolating himself, tries to limit contact with his family to ensure he doesn't pass along anything unwanted. To decompress, he likes to detach.

"When I get home I try to not think about work. I read, watch television, go outside with the kids when it's warm," said Hassaballa, also citing his deep faith. "God willing, I won't get coronavirus. I do the best I can I take as much of precaution as I can. And then I turn to the Lord for his strength and his help and his guidance and his wisdom. And I pray that I can be safe and that we can continue to be agents of his healing and his comfort."

He said because of the highly contagious nature of the virus, doctors and nurses become the pseudo-support systems for patients because family members cannot join them.

"I think (quarantining) is very important, but at the same time it's difficult for the patients. It can be really lonely and people are all gowned up," Hassaballa said.

He also spoke to the joys of seeing once struggling patients depart through the hospital exit on the road to recovery.

"This is why I became a doctor," he remarked. "We're all really excited about that and very grateful that he pulled through. Those are the (cases) that keep us going."

The number of acute cases has diminished, but the non-critically ill population was still on the rise as of late last week, he reported.

"We're definitely not out of the woods. We have to be very mindful and judicious about we how ease social distancing restrictions," Hassaballa advised.

While an analysis indicates that COVID-19 has disproportionately affected the senior population, there are young people in their 30s, 40s and 50s who get very ill, Hassaballa cautioned.

The show of gratitude for frontline workers, from the public, whether through donated meals or honking vehicle parades past the hospital, has been touching.

"It's nice to be appreciated," he said. "The overwhelming expressions on the part of everybody has been particularly heartwarming. We feel that respect." 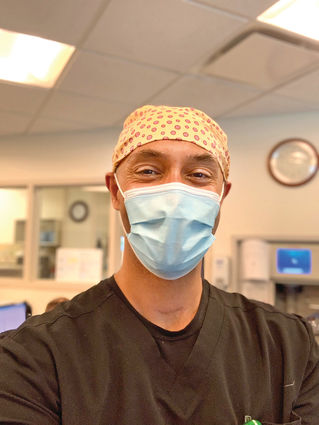 He shares in the eagerness to return to some semblance of normal and enjoy true face-to-face fellowship again, something he expects will be imbued with greater significance

"We won't take for granted our social gatherings and times of togetherness. Being forced to be away from one another is just not natural for us," Hassaballa said.

As for his professional evolution, he can already see the ways in which his approach to medicine has been irrevocably altered.

"I'm going to be a much better physician and a better clinician, better in how to take care of the sickest of the sick," Hassaballa said. "I'm much more diligent about hand-washing now and now have a greater appreciation for PPE than I did before."