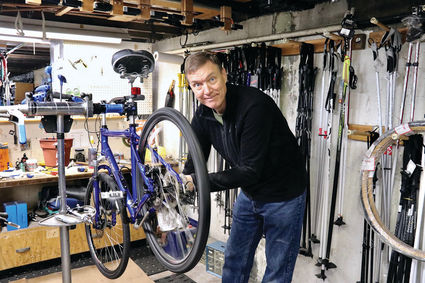 Co-owner Rick Johnson is one of several cycling enthusiasts on staff at King Keyser. With Hartley's, Hinsdale's long-standing bike repair shop, out of business, Johnson said the COVID-19 shutdown is the right time to offer this essential service. (Jim Slonoff photo)

Just a few months ago, cycling was a way for Rick Johnson, co-owner of King Keyser in Hinsdale, to get outdoors and stay in shape. Now, it's become his business.

Cycling and bike repair have long been in the wheelhouse of several members of the King Keyser team, who are avid cyclists and experienced bike mechanics. But until recently, they left the business of bike repairs to their neighbors at Hartley's Bike Shop.

"This is an area of business we have not pursued out of respect for Hartley's," Johnson said.

But with the local bike shop having closed its doors and a pandemic shuttering nonessential businesses, Johnson said the time was right to begin providing bike repairs for the people of Hinsdale. Considered an essential business under the current COVID-19 shutdown, bike repairs aren't just keeping Hinsdale riders moving, they're keeping King Keyser's doors open.

"It has been keeping us busy," Johnson said.

A provider of ski equipment and winter sports gear, the season came to an early end this year, with spring break trips canceled and most businesses forced to close their doors.

"It took a pandemic to push us in this direction," Johnson said of his staff's transition from ski and snowboard shop to bicycle repair business.

Whether it's a simple tube replacement or a full tune-up, Johnson and his team offer pickup and drop off, with about a one-week turnaround. It's not just avid bikers who are calling on King Keyser to get their vehicles in shape for riding season.

"What we're seeing is people dusting off bikes that have been in their garage," Johnson said. "People are bringing bikes down that haven't been ridden in quite some time and want to get them in working order."

Johnson said he's not certain whether bike repairs will remain a part of the King Keyser service repertoire after the restrictions of COVID-19 are lifted. But for now, he's grateful not only for the chance to keep his business open, but for the chance to serve the people of Hinsdale.

This isn't the first time the 68-year-old business has switched gears to meet the changing needs of the community. Founded in 1952 as an outfitter of tennis players and swimmers, it transitioned to winter sports gear when Hinsdaleans started hitting the slopes.

Over the years the store on Washington Street has provided Johnson with much more than a job.

It's where he met his wife, Carolyn, who has worked at King Keyser since her sophomore year of high school. She still does the store's displays and product purchases.

"She does it better than anybody around," Johnson said.

After working at the store for several years, Johnson and co-owner Jim Loufman purchased the store in 1996.

"The past month has been just trying to reinvent ourselves and keep things moving forward," Johnson said. "We've been very blessed. Our customer base has been very, very supportive."