Pepsi exec, Orangetheory franchise owner, two students are all working under one roof 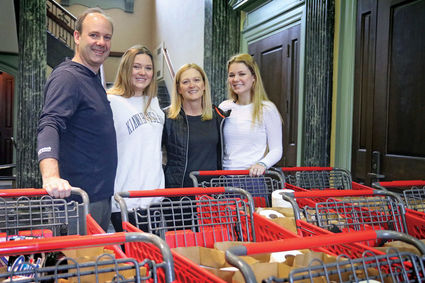 Tim, Maddie, Jacquie and Grace Fowler are spending some of their newfound family time by volunteering at HCS Family Services, an organization they've supported in the past. (Jim Slonoff photo)

As a member of the global pandemic executive team for Tate & Lyle, a UK-based food ingredients/solutions company, Tim Fowler spends most of his weekday mornings hearing how COVID-19 is affecting 180 different countries around the world.

"Even though we're here, I almost feel more globally aware," he said. "As a part of the food chain, we're an essential business, so it's really important that we keep running, do it safely."

On a Saturday night, he might be portraying Charles Darwin at a themed family dinner while dining with Princess Diana, Blake Lively and Chloe Kardashian.

"The conversations were historic - Chloe Kardashian and Charles Darwin talking about the theory of evolution," he said with a laugh.

Such is life at the Fowlers' Hinsdale home, which has served as office and classroom for Tim, Jacquie and their daughters, Maddie and Grace.

Among the family's activities are participating in the online workout programs offered by coaches at Orangetheory Fitness. The Fowlers are a franchisee, owning four studios.

"It's quite incredible how many people do them each day," Jacquie said. "We probably get 40 to 50 that do it during the session."

Another 500 to 600 people will watch the video later in the day. They closed the studios in March and suspended memberships. Since then Jacquie has been busy looking at federal economic assistance programs and developing social media strategies such as virtual triathlons and marathons to keep members engaged. The online classes are open to members and nonmembers.

"The more people we can help through this, whether it's their physical health or their mental health, (the better)," she said. "People need to get out and stop thinking about this virus and stop being paralyzed by it."

This pause in service also offers time to implement new software systems and freshen up the facilities at Orangetheory and Deka Lash, their other franchise.

"It's been busy. It's just been a different kind of busy," Jacquie said.

Their daughters have been busy with online classes. Grace is a senior at Hinsdale Central High School and Maddie, a sophomore at Indiana University, has been home since her spring break.

"I think she's trying to settle into losing that independence that she has being away at university," her mom said.

Grace has been dealing with her own set of losses, from water polo (she was team captain) to prom and graduation.

"That's tough for her," Tim said. "She's still good about it. I think about the other seniors in town, what they're going through. I feel for them. I hope they'll find a way to do something (to honor them)."

With all four under one roof, eating dinner together is a possibility for the first time in seven or eight years.

"Now we're doing that again. I think in some ways this will push people to do things differently," Tim said. "I hope some things people have put into their routines will stay."

One aspect of their routine that hasn't changed is extending a hand in outreach. On Monday morning the four spent three hours at HCS Family Services unpacking donations and pre-packing 85 bags of groceries for families to pick up that afternoon.

"Tim and I felt pretty strongly that we wanted to do something to help, so I reached out to Stan (Cook, executive director) and Erin (Sharkey, board member) at the pantry, and they said they would love the help," Jacquie said. "I think we feel pretty strongly about this group on an ongoing basis. We appreciate there are a lot more people in need right now."

While sheltering in place has presented many challenges, Tim believes it also has brought out the best in people. Colleagues on conference calls are genuinely interested when they ask each other how they are doing.

"It's actually been kind of nice to see some of that come back," he said. "Taking care of each other hasn't always been high on people's list the past five years.

"I hope that when things speed back up we don't forget these things," he added later. "There's a decency, I think, in how most people are handling this that I would like to see stick around."