Goudie broadcasts from his library as other family members do business at home, too 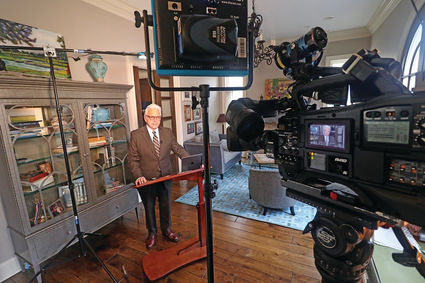 Chuck Goudie, an investigative reporter for ABC 7 Eyewitness News, has been broadcasting from home since March 16. "What I do can be done from anywhere on Earth, and we have done it from many places on Earth over the years," he said.

Hinsdale's Chuck Goudie, an investigative reporter at ABC 7 Eyewitness News, is used to broadcasting from wherever the news takes him.

He covered the days following the Sept. 11, 2001, terrorist attacks from Ground Zero in New York. He's reported from war zones in the Middle East and from behind the walls of the Vatican.

These day's he's reporting on the COVID-19 pandemic, broadcasting from the library of his Hinsdale home.

"There is one big difference, though, between this and virtually any other story I've covered, and that is this situation goes against the grain of what I do and who I am as a reporter," he said. "My inclination is to immediately go to the source of the story, where it's happening right in front of me so I can see it. The story is all around us and we are part of the story.

"It's been a rapid period of adjustment for people who do what I do when faced with the reality that there is no place to go to report this story," he added.

He's been broadcasting from home since March 16 as ABC executives looked for ways to reduce the number of people who needed to be physically present in the Chicago studio on State Street.

"Now we have very, very few people actually working in the newsroom, and the newsroom has been spread out across a pretty wide swath," he said.

Reporting on the pandemic has some similarities to covering a war in the Middle East or Bosnia without the danger, he said. Both involve long, unpredictable hours and the need to collect information and get it on the air.

"We're expected to be able to triage a news story and go from wherever we may be," he said.

Perhaps more than ever, Goudie said his role is to give people accurate information and to dispel rumors and myths that are circulating.

"People are so hungry for information and so confused about what the reality of this is and so concerned about how long it is going to last," he said.

The COVID-19 stories that have touched him the most have not been broadcast, he noted.

"The stories that we haven't told, I think, are maybe the more sensitive and heartwarming and heartbreaking, and those are the people who are contacting us wanting help in getting someone home from overseas or trying to get a message to a loved one in a nursing home or questions about things they say on the internet that we know not to be true," he said. "All of us have tried to communicate with these people and keep up with that."

Like many other families in Hinsdale and across the country, Goudie isn't the only one working from home.

"My wife, Teri, is in one room on one side of the house training executives from major companies on how to address the issues facing them," he said. "On the other side of the same floor, our daughter, Grace and her boyfriend are working on their restaurant projects. We've got a tri-business that is going here on the same floor 12 hours a day."

The same technology - minus the cameraman - that allows them to work from home also helps Chuck and Teri stay connected to their four other children and their five grandchildren.

"They're homeschooling and we're seeing that on Facetime," he said.

"As cliché as it sounds, you take it day by day. You need to keep yourself healthy and your head above water and realize other people are counting on you in order to make it moment by moment," he said.

"Maybe I learned this the hard way in covering wars and terrorist attacks and tragedies and riots and things that have longer than an hour shelf life," he added. "You have to keep your eyes above the horizon and take the long view of things. There will be an end point to this."