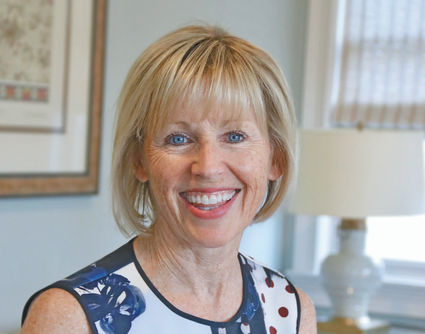 Heading into this year's Tablescapes Sunday, March 22, at the Westin Hotel in Lombard (see Page 20 for details), Alter is now the organization's president, leading the effort to provide care for families in need.

"What we're trying to do is become a beacon of hope for the people that walk into the center and are afraid at how they're going to pay for it. We bridge the gap between what they can afford to pay and what's covered," Alter said.

Angel Harvey provides a full range of medical and therapeutic services, and the event's paddle raise will help underwrite the center's new adolescent anxiety center. Attendees will be able to shop among nearly 20 vendors and enjoy food and drink demonstrations. Hinsdale's Ben Bradley will serve as emcee of the program, which will include interviews of the clinic's head physician and two women whose families are patients.

"So they can directly about their experience and how the Angel Harvey Center has changed their lives and provided hope," Alter said.

She's excited to see how people will respond to the new venue, new start time - noon instead of 11 a.m. - and shift from early March to late March.

"I think the combination of those things will help," Alter said.

The New York native grew up one of six siblings and remembers accompanying her mom to church as a child to tend the parish garden.

"For somebody that was raising six kids, to find the time to do that and fit that in her day (was inspiring)," she remarked.

Her two teen children, Emily and John, are both on the Hinsdale IWS Junior Board and will be helping out at Tablescapes. Alter is gratified to see the spirit of outreach take root in her offspring.

"It sets a good example for them, and it shows them that they can be proud of they're efforts as well," she said.

A job opportunity brought Alter to Chicago, and marriage to Tom brought her to Hinsdale, where he grew up. She appreciates the heart for service she's found in the community and within Hinsdale IWS.

"It's a really nice group of women to work with. I've gotten to know people that I would have never known," Alter said.

"It is so rewarding to see you efforts pay off."

She said the goal for this year's Tablescapes is to raise $100,000 to meet the center's needs.

"I hope that the people in the audience will feel what I feel," Alter said. "By being there they are making a difference in peoples' lives."

And the biggest payoff?

"The most exciting part is going to be to hand over the check."