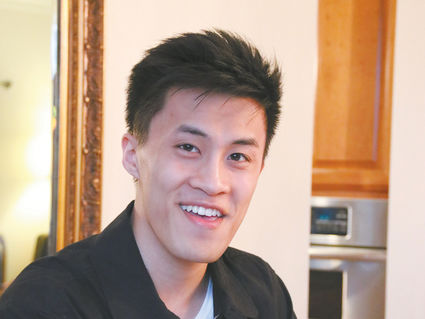 Hinsdale Central speech team member Daniel Leung captured second and third place prizes at the IHSA state meet last month as part of the team's overall third place finish. The senior said a belief in himself was a pivotal factor in his success.

This year, a self-assured Leung placed second in original comedy and third in humorous interpretation at the state meet Feb. 21-22 in helping lead Central to a third-place finish.

"With the support of my friends and the coaches, I really gained that self-confidence and allowed me to do pretty well this year," said the Central senior.

Refining his routines through dozens of practices and competitions certainly helped, too. Leung workshopped his concept with teammates again and again, taking their feedback to heart.

"Our team is tight-knit," he said. "We're really good at having group performance practices, We also have a really positive atmosphere. Everyone knows that we're giving critiques not to put you down but to build you up and be the best performer you can be."

Leung said he's always enjoyed expressing himself in unique ways to others but didn't fully recognize his knack for comedy until his speech team audition sophomore year.

"It showed me a totally different side to me that I probably never would have even realized had a not done speech," he said.

His humorous interpretation routine involves delivering an over eight-minute performance from memory. His self-developed version requires him to embody a cast of characters including a valley girl, a Russian mobster and Dracula.

"I'm given a script and I build characters around them, the way they move, the way they talk," said Leung of the act, which took first place at regionals and sectionals. "You have to develop a way to think. It's the way that you use the space around you and create sound effects and interact with imaginary objects."

For his original comedy performance, he also incorporates elements of physicality.

"I drag my body halfway across the stage while moaning," he said.

Keeping the routines fresh is key even at the point when he can do them largely by rote.

"Halfway through the season, I really didn't have to practice as much. I'd only practice if I was trying to add something new," he said. "It kind of comes down to physical memory after a while."

Leung said comedians John Mulaney and Chris D'Elia are among his favorites, particularly their ability to use both words and body language to convey a story.

Leung said he and his teammates endeavored to conduct themselves at the meet in a way that reflected well on the school both during competitions and at the hotel and restaurants.

"We made sure to follow curfew," he said. "The juniors and seniors really took it upon themselves to show the underclassmen the expectations."

Leung credited speech team with having a profound impact on his Central tenure.

"I really have enjoyed my time on speech," he said. "I think it's one of the highlights of my high school experience."