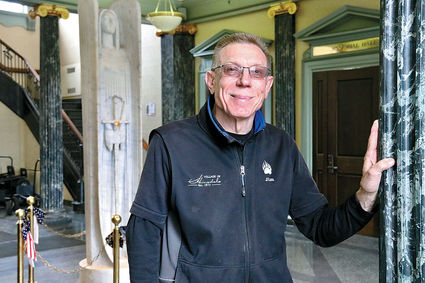 When Jim Piontowski started his new job with the Village of Hinsdale, Jimmy Carter was president. Sports fans were discovering a new source of sports information called ESPN, and Americans had yet to fall in love with Pac Man.

A lot has changed in and around Hinsdale since January 21, 1980. But one constant is Piontowski, who for 40 years has enjoyed his job as building maintenance supervisor for the village he considers home. Although he now lives in nearby Darien with his wife, Nanette, Piontowski grew up in the village, having moved here with his parents in 1971.

Freshly out of college, Piontowski was engrossed in an episode of "Gilligan's Island" when his mother told him about an ad she had seen for maintenance help at the village. He applied, took a test to assess his knowledge of all things maintenance related, and returned home, confident that his job search would continue.

"I had little hope that I would get the job," he said. "Two days later I got a call from the powers that be here at village hall."

He reported for his first day of work that very same day.

Then and now, Piontowski's job is to oversee maintenance of all of the village's public buildings. That includes Memorial Hall, which dates back to 1928, the police and fire departments, the youth center, the Public Works garage, the buildings at Katherine Legge Memorial Park, the park buildings and the Hinsdale pool.

"It's comprised of a lot of properties," he said, some old and some new, and each with a unique heating and cooling system that he needs to know inside and out.

About five years into his job, Piontowski's supervisor, building engineer Merle Eubanks, left the village, leaving Piontowski in charge. It was on Piontowski's first day at the helm that a tank in the boiler room at Memorial Hall sprung a leak, sending water into the board room below.

"The room was flooding," Piontowski recalls.

There have been small emergencies over the years, but perhaps the biggest disaster of Piontowski's tenure didn't happen in one of his buildings. When the Illinois Bell switching station was damaged by a fire on Mother's Day in 1988, leaving more than 40,000 customers without phone service, Piontowski was stationed at a Hinsdale intersection. Armed with a two-way radio, he was there to relay messages in case of emergency, as people from miles around had no means of contacting the fire or police departments.

Thanks in part to diligent maintenance and a job well done, disasters have been few in Piontowski's four decades on the job. But should a pipe break in the middle of the night or a door to a public building be left unlocked, it's likely he's who will be called to resolve the problem.

The fact that no two days are the same keeps things interesting.

"I like the fact that I'm always moving around and there's always some sort of challenge," he said.

Piontowski's job is one that is never done. And he likes it that way.