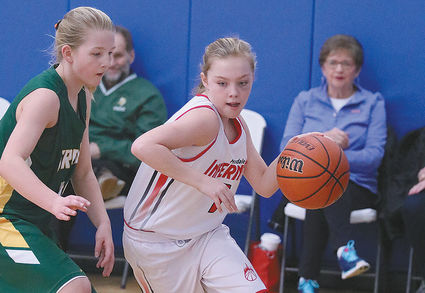 Kaleigh Kozlowski of the Hinsdale Inferno girls fifth-grade squad drives the ball to the hoop during a game Saturday at The Max in McCook.

A couple of games were also held in the school's gym, along with a day-long slate of matchups at The Max athletic facility in McCook on Saturday. Court availability is precious with 23 teams and nearly 250 athletes, an impressive scale considering Inferno was launched with only one team in 2007.

Hinsdale dad Tyler Quast has been involved almost from the outset, both as a coach and as a director on Inferno's board. The vision, he related, has held steady: to develop kids into solid high school-level players.

"The idea was for it to be a travel feeder program for Hinsdale Central," Quast said.

His two sons' Inferno experience helped them prepare for their current roles on Red Devil basketball rosters, and Quast now watches his eighth-grade and sixth-grade daughters play in the program.

"It's great experience. It's great to have them in something that gets them out every Saturday and Sunday, and learning great lessons in life," he said.

Inferno is part of the DuPage Youth Travel Basketball League, and teams play upwards of 30 games during a season that runs from October through February. Most tournaments are held in the area, but periodically teams will trek a little farther, like Wisconsin, to compete.

K.C. Diedrich has been a coach for four years and a board member for three. Her three kids all play in the program. She coaches both her seventh-grade son's team and her fifth-grade daughter's team. Combined that's a weekly six-hour time commitment for her.

The Inferno partnership with Breakaway Basketball Coaching Academy to lead team practices takes some of the pressure off.

"I think they do a good job with their training. And at least if I'm a horrible coach, the kids will still be able to learn something at training," Diedrich joked.

Nick Newlin, who is coaching both of his sons' teams, said he will let the Breakaway instructors know what skills to home in on based on the previous game performance.

"They work with the same kids over several years, so they get to know them pretty well," Newlin said. "They like to see them grow over the years."

About half of his eighth-grade son Henry's teammates have played together for the last four years.

"From that core, he's developed some good friendships," he said.

Diedrich said that the relational byproduct is gratifying.

"A lot of the same kids play together for several years, and it's cool to see their progress," she said.

Central varsity girls basketball coach Karen Persinger said Inferno is playing a significant role in the culture she is trying to create.

"Over my first three seasons here at Hinsdale Central, I have seen the growth in girls participating in basketball at the younger ages, and it's a credit to what (Inferno coaches) are teaching," she said. "I was so excited to be at tryouts in the fall and see the large numbers of girls in the gym working hard to improve their game.

"The Inferno program helps support what we are doing at the high school level by introducing young athletes to the fundamentals of the game as well as teaching them the value of team work and competition."

"It's phenomenal that we have the program and that kids get an opportunity to the play in our gym," he said. "It's a good connection between our programs and our camps and our kids."

The popularity of the program requires two days of tryouts. Cuts are unavoidable, Quast said, because the interest simply outweighs the program's capacity.

Newlin, himself an alum of Red Devil basketball, believes he would have been a better player had Inferno been around then.

He's thankful to be able share the experience now as a dad coaching his sons, Henry and William. Henry also appreciates bonding over basketball.

"I get to have good quality time with him," Henry said. 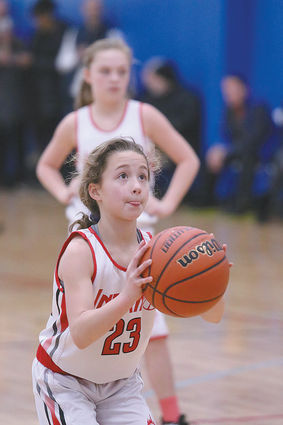 Brynn Diedrich keeps her eyes on the basket as she shoots a free throw. The fifth-grader and her teammates make up one of 23 teams in Inferno program.

Building friendships and seeing his skills improve has increased his love of the sport. And he shared one of his most enjoyable Inferno memories, which came in game last year when his squad was trailing the best team in the league by three points with time running out.

"I get the ball and I hit a game-tying three pointer," he related.

Diedrich said witnessing those transitions from perplexity to understanding is satisfying.

"You're trying to get something across to the kids and then it clicks for them, and you see them being able to reach their potential," she said. "That's what I get the greatest joy out of."

Quast said the dedication of the coaches, players and families is also inspiring.

"There's a lot of great people involved," Quast said. "It's always been a lot of fun from that perspective."