Community Revue back with 'Hinsdopoly' 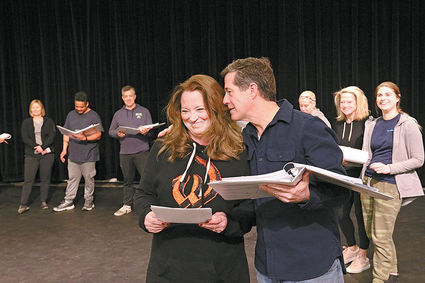 "Hinsdopoly" director and cast member Dave Heilmann rehearses a scene with Sara Martin (clockwise from top) while Hinsdaleans Teri Goudie (left) and Laura LaPlaca belt out one of the songs. Susan O'Byrne (from left), Peggy Sayre and Michelle Olejnik also are in the show, which opens Feb. 28.

Even if you're not in the cast, you might see yourself on stage at this year's Community Revue.

Hinsdale's spoof on itself returns Feb. 28-29 and March 6-7 to once again poke fun at Hinsdale happenings while supporting the important work of The Community House. Portraying properties and pieces from a Monopoly board, the 23-member cast of "Hinsdopoly" will sing, dance and spare almost no one as they explore and expose the village's notable developments, discussions and mishaps.

The concept of a Monopoly board come to life is one director Dave Heilmann first brought to the stage in his college years. That original 10-minute musical has been reinvented several times over the years. "Hinsdopoly," Heilmann said, is its fourth iteration.

Hinsdale headlines large and small are told through more than 20 familiar tunes set to brand new lyrics. Heilmann and his league of writers keep a constant watch on the village, never letting a hilarious happening or preposterous problem pass them by. Anything and everyone is potential fodder for the script.

"We've made fun of almost everybody," Heilmann said. "No one is out of reach."

In an effort to keep the show as up-to-the-minute as possible, Heilmann said revisions can be made right up to show time. If anyone has plans to do something silly, stupid or controversial in the near future, he kindly asks that it happen in time for the show.

Hinsdalean Alisa Messana attended her first Hinsdale Revue shortly after moving to the village in 2012. Eight years later, she's a member of the cast.

"It's been so much fun watching this process unfold," said Messana, who had sung before and danced before, but never at the same time. With three-hour practices held four nights a week and more rehearsals on weekends, Messana has had lots of time to polish up on both skills.

"Just when you think you can't sing and dance anymore, you do. Because it's just so much fun," she said.

Messana said she's humbled to share the stage with some very talented neighbors, who immediately welcomed her and the rest of the newcomers to the cast.

Grace Sachanda is also new to the revue. Along with her talented neighbors, she's sharing the stage with her father, longtime cast member John Sachanda.

"The show is always hilarious and fun," said Grace Sachanda, who grew up in Hinsdale and is now back to raise her own family.

She said Hinsdaleans will certainly see themselves in the onstage antics of the "Hinsdopoly" cast, but folks from outside the village also will find plenty to laugh about. There are pokes at Hinsdale, and pokes on a broader level, too, she said. 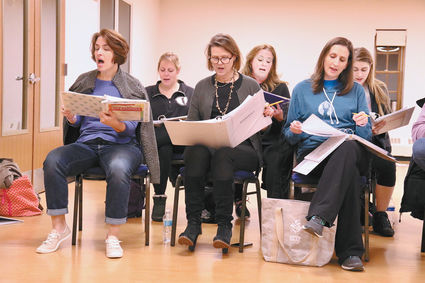 Heilmann said Messana and Sachanda are great additions to a cast that includes several longtime veterans. New members, he said, ensure that the revue will continue to entertain, tease and embarrass Hinsdaleans for years to come.

The show, Heilmann said, is a chance to support a facility that strengthens the community and the people in it. Perhaps just as importantly, it's a chance to share some laughs with neighbors and friends.

"It's a nice break to laugh at a time when people are really wound up," he said.

Tickets are available at https://www.thecommunityhouse.org or by calling (800) 838-3006. Tickets are $125, with $150 premium seats available - and include drinks and hors d'oeuvres to help fuel the fun. Audience members must be 21 or older.

The evening also will include a raffle of four cellar-worthy wine baskets.